A perfect storm of earthquake and poor governance could cripple Nepal

What makes Nepal so special – its vast rivers, deep gorges and Himalayan mountain range capped by the world's tallest peak – also explains the country's extreme vulnerability to natural hazards. The Eurasian and Indian plates beneath Nepal are moving fast in geological terms (about 20mm a year), pushing the young Himalayan range ever higher and creating these extraordinary landscapes. The pressure building as these plates move is enormous. The last large earthquake in living memory to hit Kathmandu was in 1934, when a quake measuring 8.4 on the Richter scale levelled most of the city, destroying more than 80,000 buildings and taking 8,500 lives. The geological history of the country tells the story of monster earthquakes over the last millennia. 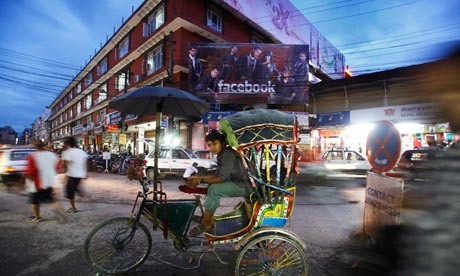 Rapid urban growth, a flood of remittance money, high density settlement patterns and a booming, unregulated construction sector are all danger signs in an active fault zone. Combined with Nepal's chronic governance crisis, the valley has all the elements for the earthquake-equivalent of the perfect storm.

The estimated 200,000 citizens of a lightly populated Kathmandu valley in 1934 would not recognise their town today. Now with a population of 2.5 million, the city has expanded rapidly over the last two decades. Eight Unesco-listed heritage sites still stand in this congested and polluted city. Most buildings are three or four storeys, and some much higher. A building code to regulate construction standards in this earthquake-prone area exists on paper only, with just a fraction of construction meeting minimum standards. Driven partly by remittances that now make up more than a quarter of the country's economy, private schools have mushroomed, mostly in formerly private houses, barely adapted to the very different safety standards of a school. Most residential buildings are non-engineered structures, owner-built and slapped together in stages with another floor added whenever money permits. Concrete has replaced wood.

The level of building failure in the event of a repeat of the 1934 earthquake will be catastrophic. The valley has only 12 fire engines, mostly vintage models and mostly out-of-service. The soil under most of the city is vulnerable to liquefaction – a nightmare scenario where the shockwave from the earthquake liquefies parts of the sandy, former lake-bed and parts of the city will simply drop. This will be a disaster of epic proportions. And unlike Port au Prince, landlocked Nepal is 400 miles from the nearest coast and its roads are likely to be blocked for weeks by landslides. It's a planner's nightmare.

After five years working on this in Nepal, I have come to recognise that addressing Nepal's vulnerability to natural hazards is first a governance problem, and only second, about funding and expertise. Multi-party democracy that was introduced in 1990 has brought a highly unstable political system with annual changes of government, and few incentives for leaders to embark on long-term and potentially unpopular measures – like land use planning or enforcing building codes – in anticipation of an event that may not happen on their watch. Since Nepal's peace accords were signed in 2006, the political class has been drawn into peace negotiations and power sharing rather than less glamorous tasks like school building regulation. Local elections have not been held in more than a decade, leaving cities without mayors. Towns are run instead by bureaucrats accountable only to their immediate boss. No one is visiting the fire stations and kicking the tires. No one's job is on the line if the emergency services fail to show up. Underpaid, transient civil servants are responsible for certifying that new building projects are "to code", but they would have to get out from behind their desks to see that the designs they have certified on paper do not remotely match the actual construction.

The international community has woken up to this clear and present danger. In 2009, the UN, the Red Cross Movement, the World Bank and Asian Development Bank first came together to form an international consortium. The governments of the United States, the United Kingdom, Japan and Australia, as well as the European Commission have also signed up. Today, the Nepal Risk Reduction Consortium represents an unprecedented international alignment of actors – developmental and humanitarian, government and non-governmental – all working to a common plan with a shared sense of urgency and ambition. And the Nepali bureaucracy, for its part, is steadily getting more engaged and better organised.

But while the storm brews off Nepal's tectonic coastline, most of Nepal's political leaders remain focused exclusively on politics and power. If there is an issue crying out for some bipartisanship, surely this is it. Urgent though many other issues are, they will become footnotes in the history books when at some point in the future, Nepal's physical and political landscape will be transformed in just 40 seconds, likely taking with it many of today's and tomorrow's leaders and erasing years of hard-won development gains. The international community can make a big difference through initiatives like the Nepal Risk Reduction Consortium. But the real game-changer will only come about when risk reduction measures align with governance reforms. And when "duty of care" enters the political lexicon of the country concerned.  Guardian