Prophecy Dude - After Assault From the Heavens, Russians Search for Clues and Count Blessings

After Assault From the Heavens, Russians Search for Clues and Count Blessings

CHEBARKUL, Russia — After a brilliant flash illuminated the sky on Friday morning like a second sun, Alyona V. Borchininova and several others in this run-down little town in the Siberian wilderness wandered outside, confused and curious. 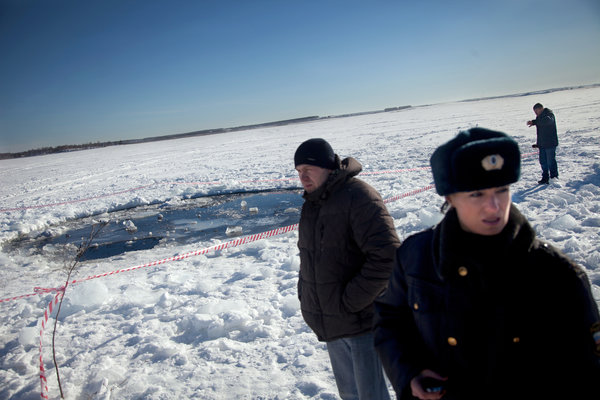 They followed the light’s path to the town’s lakefront, where they trudged for about a mile over the open ice until they came to a startling sight: a perfectly round hole, about 20 feet in diameter, its rim glossy with fresh ice that had crusted on top of the snow.

“It was eerie,” Ms. Borchininova, a barmaid, said Saturday. “So we stood there. And then somebody joked, ‘Now the green men will crawl out and say hello.’ ”

Russians are still coming to terms with what NASA scientists say was a 7,000-ton chunk of space rock that hurtled out of the sky at 40,000 miles an hour, exploding over the Ural Mountains, spraying debris for miles around and, amazingly, killing no one.

As the Russian government pursued the scientific mysteries of the exploding meteor, sending divers through the hole and into the inky waters of Lake Chebarkul on Saturday, residents reacted with a kind of giddy relief and humor over their luck at having survived a cosmic near miss.

NASA estimates that when the meteor entered the atmosphere over Alaska, it weighed 7,000 to 10,000 tons and was at least 50 feet in diameter, a size that strikes the Earth about once every hundred years, and that it exploded with the force of 500 kilotons of TNT.

The shock wave injured hundreds of people about 54 miles away in the industrial city of Chelyabinsk, most from broken glass; collapsed a wall in a zinc factory; set off car alarms; and sent dishes flying in thousands of apartments. Broken windows exposed people and pipes to the Siberian winter; many residents focused Saturday on boarding windows and draining pipes to preserve heating systems.

If pieces of meteorite reached the surface, as NASA said was likely, they fell largely into the sea of birch and pine trees in this patch of western Siberia, now blanketed in snow.

Lake Chebarkul is one of four sites that the government believes felt a significant impact, the minister of emergency situations, Vladimir Puchkov, told the Interfax news agency.

As the sun rose there on Saturday, the snow crystals sparkling like a million tiny mirrors, steam wafted from the ice crater, apparently related to the work of the divers, but the lake yielded few clues.

Mr. Puchkov later said the divers had found nothing on the lake bed, but had not ruled out meteor shrapnel as the cause of the hole.

“Experts are studying all possible places of impact,” he said. “We have no reports of confirmed discoveries.”

A meteorite fragment could help scientists better apprehend the composition of the meteor, perhaps shedding light on how close it was to descending further before exploding from the heat or to hitting the surface. Such circumstances could have caused vastly more casualties in this rust-belt region of military and industrial towns, a major nuclear research site and waste repository, and other delicate infrastructure.

In Chelyabinsk, the worst-hit town, most who sought medical attention had been released from hospitals by Saturday, the Ministry of Health reported. A total of 1,158 people, including 298 children, sought medical care. Of those, 52 were hospitalized. On Saturday afternoon, 12 adults and 3 children remained in hospitals.

Health officials evacuated to Moscow a woman who had broken two vertebrae after falling down stairs. One man’s finger was cut off by broken glass.

Overshadowing these misfortunes, a fourth-grade teacher in Chelyabinsk, Yulia Karbysheva, was being hailed as a hero for saving 44 children from glass cuts by ordering them to hide under their desks when she saw the flash. Having no idea what it was, she executed a duck-and-cover drill from the cold war era.

Ms. Karbysheva, who remained standing, was seriously lacerated when glass severed a tendon in one of her arms, Interfax reported; not one of her students suffered a cut.
In its 32-second terminal plunge into Siberia, the meteor left a smoke contrail in the sky that twirled in a diabolical, turbulent wake. Some witnesses described an unbearably bright light, and the feeling of heat on their exposed faces.
Tatyana N. Vasiliyeva, a retired accountant who was walking with her husband on the lakeshore here Friday morning, said she had looked up to see “a star getting brighter, like the sun.”
“It was a fiery star falling right on me,” she said. “And so I thought I should just close my eyes now.”

But on Saturday, she was back at the shore, giggly and disappointed that the police would not let her near the ice hole.

Other Russians found different meanings in the event.

A hawkish deputy prime minister, Dmitri O. Rogozin, suggested that the world’s leading scientists develop a missile system to deflect asteroids from Earth. “Today neither the United States nor Russia has the capability to shoot down such an object,” he warned, according to Interfax.

In the Church of the Transfiguration in Chebarkul, on a hill overlooking the lake, Deacon Sergiy was in mid-service on Friday, having just closed the doors in a wall of icons symbolizing the entombment of Jesus in the holy sepulcher and the imminence of the Resurrection. Just then, a bright light spilled in through every window.

“It was like a new sun was born,” he said. “This all gives us reason to think. Is the purpose of our life just to raise a family and die, or is it to live eternally? It was a reason for people on earth to look up, to look up at God.”

He called the flash more significant than earlier signs he had noticed, like the time a white dove alighted on the church belfry, or when a cloud appeared above the church in the form of a cross.

Out on the lake, an ice fisherman, who gave his name only as Dmitri, shrugged off the event. “A meteor fell,” he said. “So what? Who knows what can fall out of the sky? It didn’t hit anybody. That is the important thing,”  NYTimes