Prophecy Dude - Ahmadinejad: Zionist regime an insult to all humanity

Ahmadinejad: Zionist regime an insult to all humanity

Iranian President Mahmoud Ahmadinejad referred to Israel as a western "tool to dominate the Middle East" and an "insult to all humanity," in a speech given at a 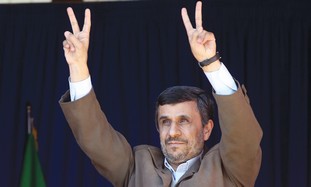 Protesters held massive rallies in cities across Iran on Friday, marking Al-Quds Day, an anti-Zionist event which calls for the liberation of Palestine.

"Today, Israel and the Zionist entity are against the preservation of all human rights and human dignity," IRNA quoted Ahmadinejad as saying at the event.

Demonstrators waved Palestinian flags and held signs bearing slogans such as "Down with the US" and "Death to Israel" at Friday's rallies.

Iran's Fars News Agency reported that millions of people were expected to take part in the events in over 550 cities throughout the country. The report added that the demonstration was not only against Israel and the US, but the silence of the international community at "the crimes committed in the occupied lands."

Click here for full Jpost coverage of the Iranian threat

Al-Quds Day rallies were also scheduled to take place in other countries throughout the Muslim world on Friday. Hezbollah leader Hassan Nasrallah was expected to address the crowd gathered at the organization's Al-Quds Day celebration Friday evening at Al-Mahdi – Hadath School in the southern suburb of Beirut, according to Lebanese television station Al-Manar.

The Iranian show of support for the Palestinian cause comes amid tension between Israel and the Islamic Republic regarding the Iranian nuclear program. Israel has demanded that the Iranians halt the development of their nuclear technology, threatening a military strike if its demands were not met.  Iran has responded by asserting that its nuclear program is exclusively for non-military purposes and decrying Israel's constant threats as "psychological warfare."

Al-Quds Day, however, is not a new phenomenon in Iran. Ayatollah Khomeini established the event in 1979 following the Islamic Revolution and wanted to "export" the event to the rest of the Muslim world.  Khomeini's successor, Supreme Leader Khamenei, reaffirmed his commitment to the Palestinian cause Wednesday, stating that he is confident that "the fake Zionist (regime) will disappear from the landscape of geography,” Iran's Mehr News Agency reported