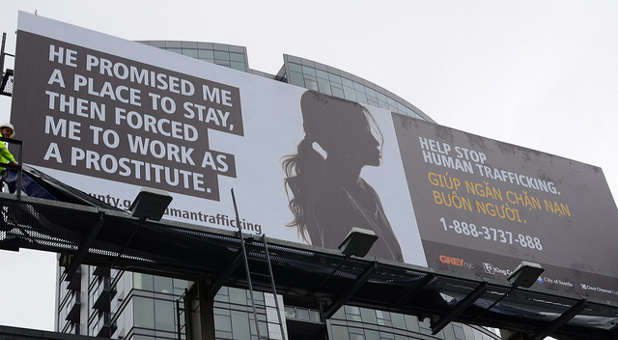 As stunning as the figure may seem, 300,000 children are missing in America and many are believed to be "caught in the evil trade of sex trafficking," an advocate fighting human trafficking told Charisma News.

"It's a massive problem," says Ashleigh Chapman, president and chief executive officer of the Alliance for Freedom, Restoration and Justice in Dallas, Texas. "The FBI and the National Center for Missing & Exploited Children pegs the number at 300,000 children.

"The 300,000 figure is the number of children who are missing in our nation and we are deeply concerned that many are being trafficked in this nation. Many are being raped for profit every night. It's child pornography, selling children online through the dark web. It is prostitution of children on the streets. It's a horrible thing."

Human trafficking—the sale of human beings for labor, sex and organs—is a $150 billion industry worldwide. It is happening all around the world and within the United States.

In response, Chapman's organization is working with Gateway Church in Dallas and many other churches and organizations to mobilize churches in America and worldwide to do their part to fight the problem.

To equip churches with the knowledge, resources and strategies they will need to combat sex trafficking and protect the vulnerable in their communities, Chapman's organization has created the Engage Together Church Teaching Series.

By journeying through this eight-session series, participants will discover how the church is uniquely positioned to make a strategic impact. And more importantly, by the end of the series, they will have developed a plan of action unique to their strengths and their community's needs.

The toolkit was designed specifically for the church with input from experts serving in the field and churches already engaged in combating human trafficking throughout the nation.

"The church is uniquely positioned to combat human trafficking and protect the vulnerable," Chapman says. "But we know that most people in churches feel overwhelmed by the darkness of human trafficking or the complexity of it. They may not do anything if they think they can't make a big difference.

"So what we designed this teaching series to do is to answer those concerns and show them the way. We want to say to churches that we can raise up an army to eradicate what should not exist."

Worldwide, more people are enmeshed in "human slavery" than ever before in history. Currently, experts estimate up to 35 million people are "slaves," Chapman says.

"We are primarily talking about slavery for the purpose of sexual exploitation, labor trafficking and also organ trafficking," Chapman says. "There is a very dark trade going on where people's organs are being taken from their bodies and sold on the black market. It's happening all over the world. We hear the worst stories out of Africa and the Middle East.

"There are reports that children's bodies are being found with missing organs and that whole villages are being ransacked and women and children are sold into sexual slavery. The organs of the men are removed and sold into the black market."

Despite this darkness, Chapman believes the solution is for the body of Christ to rise up and for members of churches to work in their own communities to address the problem.

"If the church would rise up and understand how to get engaged and do it collaboratively—it takes a body of Christ mentality to help the oppressed—and then we'll see miracles happen," Chapman says.

Since 2010, thousands of church members, pastors, business people, government officials and others have joined the movement, Chapman says.

Troy Wierman, pastor of Local/National Outreach at the 30,000-member Gateway Church in the Dallas-Ft. Worth, Texas area, says his church became more aware of the human trafficking issue when the Super Bowl came to town.

"From that point as a church, we knew we had to respond, but we didn't know how to respond," Wierman says. "Our model of ministry at Gateway is to work with ministries as partners with those ministries in order to serve the local community.

"AFRJ came along and we were introduced to them. Our first instruction was great because what they do is form alliances of vetted ministries that work in anti-trafficking. That's how our relationship with AFRJ began. We utilized their relationships to determine what ministries we wanted to work with locally."

With the Engage Together toolkit, Wierman says the church is teaching its members practical things they can do to fight trafficking.

"The toolkit was developed to teach church members how to engage in the community as a church," Wierman says. "Basically, we found out what is going on in our community to determine the signs and symptoms of trafficking. And so we are really excited to get involved in this. We have to engage with the community to seek those who are lost in this horrific thing called sex trafficking."

Bonnie Jo Daniels, the project director for Hope for Freedom initiative based out of the 15,000-member Christ Fellowship Church in Palm Beach Gardens, Florida, says the Engage Together campaign is a great one for churches to use.

"Churches really don't know what to do or where to begin," Daniels says. "And so we work with our churches here locally and help them to navigate. Even small, 100-member churches can do something as simple as putting together duffel bags for survivors with pajamas, robes, toiletries and a Bible so when they are rescued they have this welcome gift their first night. We make sure that a teddy bear is in there and a blanket. That's something even the smallest church can do." Charisma