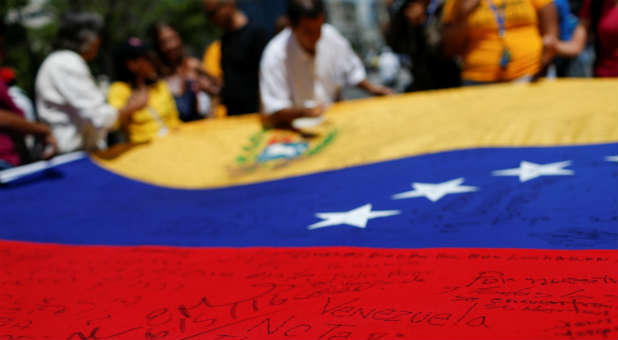 What do you do when your country is in free fall? When lineups for basic foodstuffs wind around the block, and hours later when you get your turn, the shelves are bare? When the police stop you anywhere and everywhere, peering into your vehicle, checking your status? When homicides in the capital alone can average up to a couple hundred weekly? Where corruption earns your country the dubious award of being the highest in the world? Where the Marxist president has neutered the majority Congress and dissolved the independence of the Supreme Court?

When all this and more happens, protests are predictable. We wound our way through shouted insults as we walked to the Congress to meet with members. Streets were clogged. Businesses and even the Supreme Court were shut down. Police were dressed in battle gear, and not just for show. It felt very much like my experience in Cairo in the 2011 "Arab Spring" revolution.

All of this corresponded to what I had heard about Venezuela, but here is what I didn't expect: At 6 in the evening, we drove to a community called "The Cemetery," in downtown Caracas. In the midst of economic collapse with inflation this year at 1,000 percent, with social disintegration the norm, killings and countless kidnappings a daily experience, and a government seemingly disinterested in finding solutions, what did I find? A couple thousand Christians in prayer and worship. Each night this week, Iglesia Evangelica Pentecostal in Las Acasia, the largest evangelical church in the country, vibrated with a marvelous Latin sound and rhythm, all in tune with Spirit-inspired prayer.  How counterintuitive this all seemed, and one could even wonder, "Are these people oblivious to their realities?"

I came as a Canadian, representing a world Christian community: The World Evangelical Alliance. As I spoke to a group of pastors, then met with members of Congress, I admitted that while I wanted to absorb their realities, I could return home to a land with social and economic safeties and to a judiciary inclined to fairness. In a country where the opposite is true, I saw the people of God acting in ways that replicated early church faith.

In such an environment of distrust, it would be irresponsible of me to speak of individuals whom I met or repeat what I was told. I can say this though: The Spirit is at work in lives in ways that those who are in power in this country know nothing about, and God is preparing the way for the future.  I heard stories of patent evil and of attempts to destroy those whom God has called to a saving faith. In the confidence of Christian solidarity, together we prayed and entrusted these endangered people to the protection of the Lord. They know, literally, that their physical lives are in jeopardy and in need of God's presence.

What came to mind was Joseph, who thought back to being sold into slavery by his brothers. When they feared retribution he told them, "You meant it for evil but God meant it for good" (Gen. 50:20).

What of Venezuela's future? In a real sense, tomorrow is today. Their world is in collapse and it will get worse. The government continues to accuse others of causing their problems. Far be it from them to admit to any false assumptions, dumb policies or self-centered actions. They have destroyed the infrastructure of food production. And the systems of corruption have been refined to such a high level of efficiency that even if the government tried a reverse move, the momentum toward disarray has passed the tipping point.  For most of its history Venezuela has been run by "strong men" or Fuertes. A likely solution is that another strong man will rise and, with military support, try to wrest the downward spiral into a long-term reprieve.

I met with the Venezuelan heads of the Roman Catholic Bishops and the Evangelical Alliance. Together they are seeking to convince the government to open the door to medical and food aid from outside. Yet even if they achieve some success, the immediate future is for increased disintegration.

It was in this context that I listened to worship and praise so authentic, so personal and yet corporate. While their response might on the surface seem surprising, when we entered that place and moment, it made sense. It not only seemed right but was the very thing needed.

What is God doing? What He always does when we've come to the place where we know we need Him. He lifts our eyes to see today through the wide angle of tomorrow. Today is not the end. Hope provides a different lens. As we see life this way, our reliance takes into consideration His partnering with us: We are not left alone.

As a senior member in government said in the security of our confidence, "God is able." That may be easy for me to say as I board a flight for home, but for him, his very life depends on that being true. Charisma