Ancient language comes back to life: Maronite revival in Israel 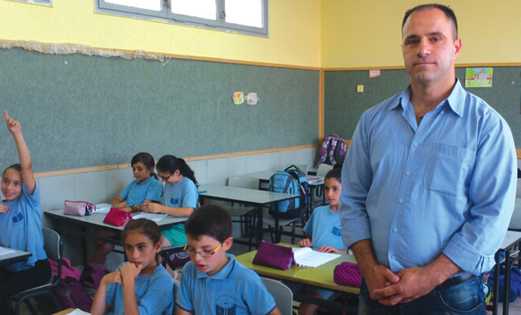 Members of the Christian community in Israel are bringing back an ancient language spoken by Jesus, and are finding fellow speakers in unexpected parts of the world.

A journalist congratulates Shadi Khalloul in Arabic on the birth of his second son, Yaakov, with the salutation, “Mabruk!”

“In Aramaic,” Khalloul says with a smile. “You say ‘Brihu.’” A Maronite Christian from the Galilee village of Jish, 37-year-old Khalloul became hooked on reviving the traditional Maronite language of Aramaic after taking a three-month course for adults offered by Father Bishara Suleiman, the Saint Maroun parish priest. Today the elderly clergyman regularly teaches Aramaic as part of religious classes for the children of the parish, an option that was not on offer when Khalloul was growing up.

With 65 percent of its residents belonging to the Maronite Church, Jish is the only village in Israel with a majority Maronite population. Muslims constitute about 35 percent of the residents, with a smattering of Melkite Christians making up the tiny remainder.

When Father Suleiman’s course ended, a small group of students continued learning the language on their own. Soon they connected with Aramaic-speaking communities in Sweden and Holland, seeking guidance and learning materials.

“This is our Maronite Aramaic heritage,” Khalloul tells The Jerusalem Report. “A nation without a language and without his forefathers’ language has no future.”

Like Eliezer Ben Yehudah – considered the father of modern Hebrew for his efforts in the late 1800s to transform the ancient language of Jewish prayers into a modern spoken language – Khalloul only talks to his 2-year-old son, Aram, in Aramaic (Ben Yehudah communicated with his son solely in Hebrew). Khalloul is also quick to point out that others, such as the Welsh and the Catalans, have also had varying degrees of success in reviving their traditional languages. Jerusalem Post