EP:  Hong Kong  Some 140 million years after it erupted and then toppled into the sea, an ancient supervolcano in Hong Kong is making headlines. The government announced Thursday that it had located the supervolcano—the first discovery of its kind in southeastern China—while surveying in the area in 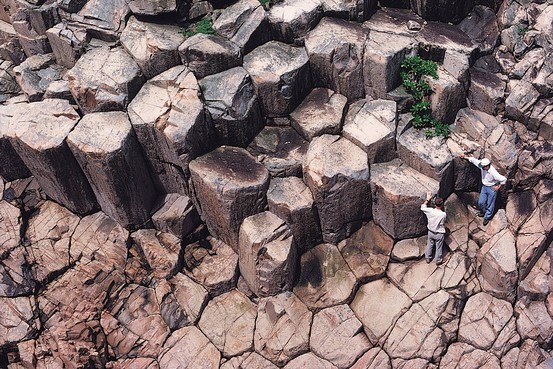 southeastern Hong Kong. The volcano is now extinct and poses no threat to Hong Kong. What makes the volcano super? When it last exploded 140 million years ago, it would have darkened the sky with 312 cubic miles of ash, enough to blanket all of Hong Kong, said Denise Tang of the government’s civil engineering & development department, which discovered the volcano. About 50 other such supervolcanos are known to exist around the world, she said. The original base of Hong Kong’s supervolcano would have measured about 11 miles in diameter, and the vista of vaulting, hexagonal rock columns and small islands it left behind remain gorgeous reminders of its dramatic geologic past. They can be toured by boat, but Ms. Tang was quick to warn any would-be tourists to use caution before making any expeditions. “Although it’s very beautiful,” she said, “there’s no facilities, no pier facilities, so we actually do not recommend people try to land on the island.” –WSJ
Remnants of an ancient super volcano have been discovered near Hong Kong. According to experts, the last eruption of the volcano occurred in the Mesozoic Era at the turn of the Jurassic and Cretaceous Periods about 140 million years ago. The diameter of the gigantic crater spans 18 kilometers. Scientists have confirmed the earlier hypothesis that the volcano settled down many years ago and assured Hong Kong residents that it won’t erupt again. -TASS