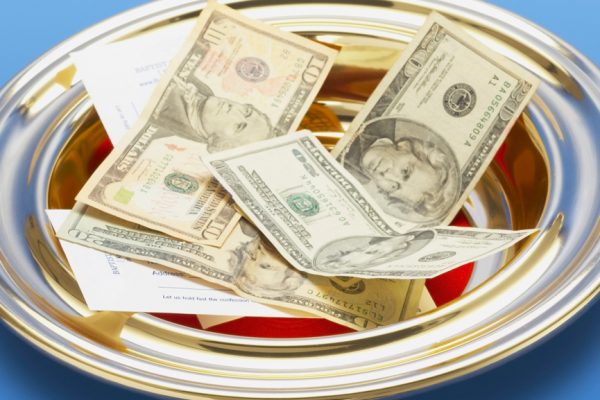 Sobering Study Reveals: Church Leaders admit the answers are in the Bible, yet they refuse to speak on the controversial topics.

collection plateIf you are wondering why there are not more pastors and preachers in America like the Black Robed Regiment, then you need look no further to a two-year study conducted by George Barna. Barna gave the results of the study earlier this month and revealed that while a majority of them claim they believe the Bible provides specific answers to the issues America faces, they will not speak out on those issues from the pulpit.

“What we’re finding is that when we ask them about all the key issues of the day, [90 percent of them are] telling us, ‘Yes, the Bible speaks to every one of these issues,’” he explained. “Then we ask them: ‘Well, are you teaching your people what the Bible says about those issues?’ and the numbers drop…to less than 10 percent of pastors who say they will speak to it.”

Barna explained that the vast majority of pastors said that they determined whether a church was successful or not based on five things: Attendance, giving, number of programs, number of staff, and square footage.

Wow! Does that sound anything like what you read in either the Old or the New Testaments? And yes, the Church existed in the Old Testament too (Acts 7:38). The true mark of a successful, biblical Church is are they teaching, preaching and living in obedience to the Word of God? It has nothing to do with numbers. Just take a look at any of the prophets of the Old Testament. Would Noah or Jeremiah have been considered successful by these standards? How about the Son of God Himself? Would Jesus have been considered successful by these standards? Yet, He is the One that builds the Church.

These men are not those who care for the sheep, but rather fleece the sheep for their own self-aggrandizement. They love money and the approval of men rather than fear God and seek to glorify Him. They know the truth, but they fail to feed the people God has entrusted to them. They are building their own little kingdoms upon the earth, rather than seeking after the Kingdom of God and of His Christ. This indicates several things about them:

In addressing the cowardice of America’s pulpits and the corruption of politicians, Gordan Runyan wrote these words:

Politics is dirty, dirty business. Thus, I’m told, good, clean Christians ought to stay out of it.

But maybe the reason it’s dirty business, and full of every kind of corruption, is because those who are meant to be salt and light in the world have voluntarily left the field?

The Christian landscape in America is “fair teeming” (my nod to Tolkien) with egoistic entrepreneurs masquerading as ministers, building their own kingdoms on the backs of well-meaning dupes who continue to stuff their coffers for them. And since one key to business success is to appeal to the widest possible marketplace, these posturing prosperity poofters shy away from speaking about anything that might sniff of controversy. If they start talking about the strange brew of Islamo-facism and race-baiting communism that animates our President, that may not be good for business: they may wind up preaching in the same sort of tiny congregation I serve.

Pastor Chuck Baldwin wrote an article recently titled Odds Are that Your Pastor is Keeping the Truth from You Instead of Preaching It, in which he said that the statistics Barna provided caught him off guard. But, is anyone really surprised? I’m not.

He then states what is obvious. “We are not dealing with IGNORANT pastors; we are dealing with DELIBERATELY DISOBEDIENT pastors. They are PURPOSELY CHOOSING to remain silent. Will that make any difference to the Christians in the pews who say they want their pastor to take a stand but are willing to overlook his ‘ignorance?’ Probably not. But, at least, we now know what the real issue is, don’t we?”

Yes, we do, but we didn’t need Barna’s study to determine this. It’s in the pages of Scripture. This is nothing new.

My friend Dr. Joel McDurmon rightly adds that the first part of the remedy is education, which he wrote about in his book as part of a multi-pronged solution to restoring America. This is where the people must begin. They must understand the Word of God and obey it. That is their repentance.

As for these pastors, repentance is the solution for them as well. I’ve often pointed out to people that the apostle John lists cowards first among those which will have their part in the lake of fire (Revelation 21:8). They need to be strong and courageous proclaimers of the Word of God, not editing it, not watering it down and certainly not withholding it from the people. May God grant these men the grace to overcome their cowardice and to proclaim the truth without apology for the glory of God. DCClothesline