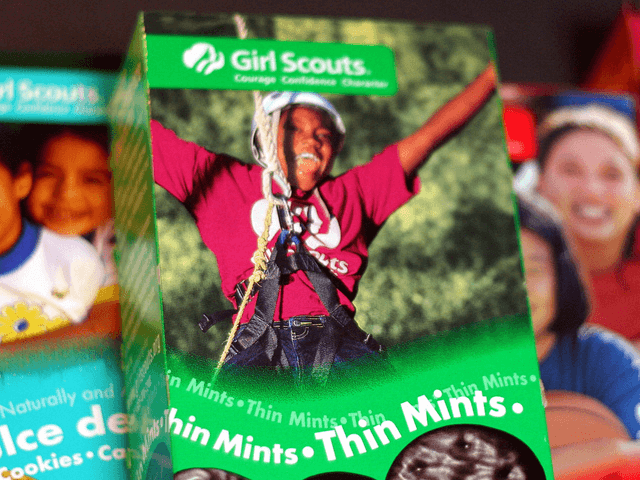 A nine-year-old boy is a member of the Girl Scouts in his local Illinois community.

With cookie sales time here, Stormi went door-to-door in his neighborhood. Cookies, after all are how the Girl Scouts get most of their money.

Though it is nearly impossible to spot a nine-year-old boy dressed as a girl, somehow one of his neighbors did and, according to Stormi, said, “Nobody wants to buy cookies from a boy in a dress.”

Stormi went home to his foster mom and cried. Stormi said the man’s reaction made him sad “Because I’m a girl.”

Stormi and his mom decided to get even. So they took Stormi’s cookie sales digital using a portal provided by the Girl Scouts. Stormi’s plight went viral and he has sold cookies from coast to coast. Stormi is now over 3,000 boxes sold, and has received accolades from around the country.

Stormi is just the latest example of how children are increasingly being used to make the transsexual case. A boy-in-a-dress named Jazz has a popular TV show and a new book. A little boy enamored of drag make-up had his picture rocket around the Internet last month.

Experts warn that transsexualism is problematic because it is not real. They say no one can change their actual sex from male to female or female to male. Johns Hopkins University closed its sex change unit years ago because the prestigious institution concluded that the desire to change ones sex is evidence of an underlying mental issue.

Noted psychiatrist Dr. Paul McHugh says a man who thinks he is a woman is similar to an anorexic who looks in the mirror and sees a fat person. Such a person needs treatment. Studies show that transsexuals have a high rate of suicide. Encouraging transgenderism among children like Jazz and Stormi can cause serious problems.

There are no definitive numbers of how many people in the United States consider themselves “transgender.” The pro-gay Williams Institute at UCLA claims there are 700,000, but this small number would not square with Center for Disease Control numbers that show the total gay population of the United States is only 1.6 percent, which comes out to less than 4 million.Breitbart