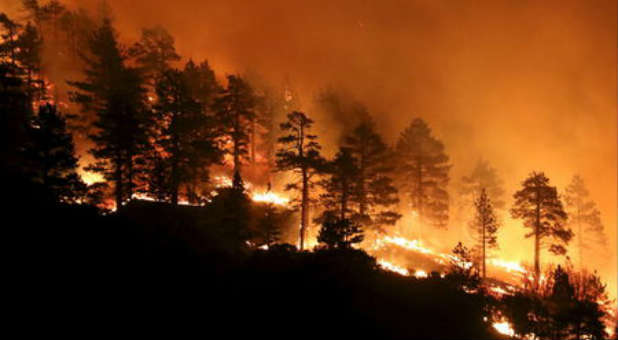 When God flooded the earth in the days of Noah, He promised that He would never destroy the planet again by water. Instead, God would use fire.

Is the word of the Lord being fulfilled right here in the United States? California has been under a drought warning for months, yet within 48 hours, the state went from wildfires to floods and saw a 4.0 earthquake rock the southern part of the state.

Luke 17 details the coming of the kingdom, referencing both Noah's flood and the fire and brimstone that destroyed Sodom and Gommorrah. Now, both appear to be happening in the same place at the same time.

This week in California: "We were surrounded by the flames. They were to the left, then in front of us and they came around to the right. We were in a big horseshoe in the middle," Russell Allevato tells a CBS affiliate.

And this month alone, California had more rain than any other July in the past 100 years.

"It's a sweet, promising start," said Bill Patzert, climatologist for NASA's Jet Propulsion Laboratory, tells the Los Angeles Times: "Except for all the damage it does. ... Be careful for what you wish for. Great droughts usually end in great floods."

Also happening in California: The Interstate 10 bridge was shut down for flooding and beaches were closed for lightning. As for the earthquake, NBC reports that the last one to occur along the Hayward Fault was in 1868.

"It could happen in the next 30, 40 or 50 years," David Schwartz, a U.S. Geological Survey (USGS) senior research geologist tells NBC. "But we know sometime soon the Hayward Fault is going to pop."

Meteorologists are looking to El Nino, a warm weather pattern, for answers.

According to the Washington Post, the presence of a strong El Nino almost ensures that 2015 will become the warmest on record for Earth and will have ripple effects on weather patterns all over the world.

"The warming that is currently suggested by the models would be unprecedented in the observed record," says Daniel Swain, a climate scientist at Stanford University. "It's certainly a situation that we haven't seen before."

Perhaps we haven't seen it before because it has been reserved for such a time as this. Biblically, the last days are to be filled with fire.

According to 2 Peter 3: "For they willingly ignore that, by the word of God the heavens existed long ago, and the earth was formed standing out of the water and in the water, by which the world that then existed was flooded with water and perished. But by the same word, the heavens and the earth that now exist are being reserved for fire, kept for the Day of Judgment and destruction of the ungodly." Charisma