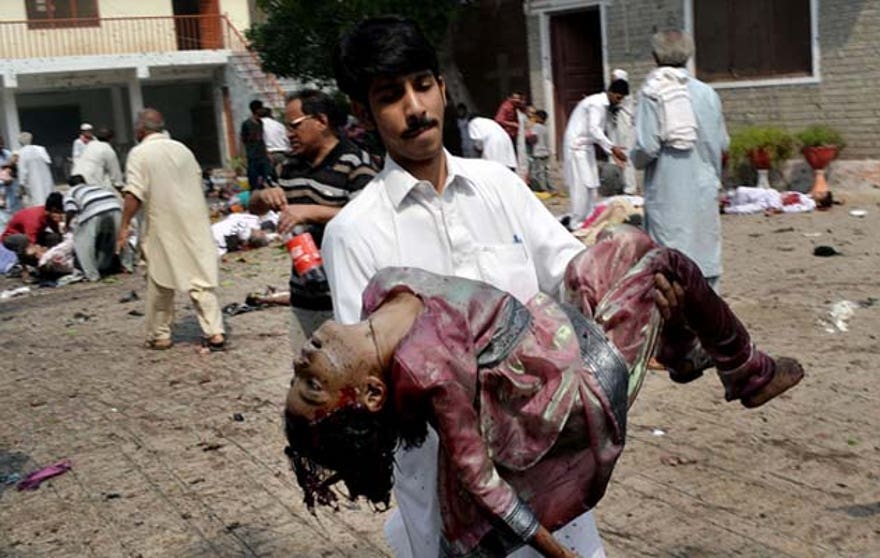 Violence against Christians is on the rise in Pakistan, where a disturbing trend of attacks by Islamist fanatics has made life inside the U.S. ally hell for religious minorities.

The 97-percent Muslim nation that straddles the Middle East and Asia is one of the most dangerous places in the world for Christians, according to an annual report published last month by the State Department following calls by the U.S. Center for International Religious Freedom to include the country in its list of "Countries of Particular Concern."

"Pakistan is on record as having one of the world's worst and most widely abused blasphemy laws, which has resulted in abuse of the law through false accusations that prosper under a system of impunity," Tiffany Barrans, international legal director for the American Center for Law & Justice, told FoxNews.com. "Blasphemy accusations have resulted not only in the destruction of the lives of the accused but have often been at the root of the destruction of entire Christian communities."

The State Department's Oct. 14 International Religious Freedom (IRF) report submitted to Congress said that in 2014, government policies in Pakistan, "did not afford equal protection to members of majority and minority religious groups, and due to discriminatory legislation, minorities often were afraid to profess freely their religious beliefs. Media and nongovernmental organizations (NGOs) reported killings of religious minorities by police."

"Our foreign policy toward Pakistan has failed in the most basic form - to utilize the leverage of aid to ensure protection for the persecuted minorities."

"The government’s general failure to investigate, arrest, or prosecute those responsible for societal abuses promoted an environment of impunity that fostered intolerance and acts of violence," the report said. "In numerous cases during the year, authorities failed to protect victims of religiously motivated mob violence."

The IRF report -- required by the International Religious Freedom Act (IRFA) of 1998 -- comes after a string of recent high-profile crimes against Christians in the Islamic country -- including the gang rape last month of a deaf Christian woman inside her home in the Kasur district of Punjab. Three Muslim men reportedly entered the home, while other male family members were at work, and attacked the woman who screamed for mercy. One suspect, Muhammad Umar, was reportedly arrested, while the other two men remain at large.


Human rights experts fear the situation has only worsened inside the 97-percent Muslim nation. (AP)

The woman's family hired Christian lawyer, Sardar Mushtaq Gill, who runs an advocacy group that offers free legal assistance to Pakistani Christians and other minorities persecuted for their religion. Gill told Fides news agency that it is difficult to prosecute such cases in Pakistan, saying, "Often in these cases the police take no action or, worse, side with the rapists."

In October, a Christian bride-to-be, Nabila Bibi, was abducted by a Muslim man in Pakistan and forcibly converted to Islam. In May, a mob of Muslims burned Christian homes and a church and threatened to kill people after a mentally ill man was accused of burning pages of the Koran in one Pakistani town. And last year, a young, pregnant Christian woman and her Christian husband were burned to death by a Muslim mob in the Punjab province for committing blasphemy.

Religious rights groups say the deadly attacks in Pakistan are especially alarming because the Islamic country is a major recipient of U.S. assistance.

Suicide bombers struck outside a historic church in northwestern Pakistan in 2013, in the deadliest-ever attack on the country’s Christian minority. (AP)

"As a country that receives considerable aid from the United States, blame for the continued failure to protect religious minorities in Pakistan lies both on the Pakistani Government and the U.S.  Government," Barrans said.

"Our foreign policy toward Pakistan has failed in the most basic form - to utilize the leverage of aid to ensure protection for the persecuted minorities," she noted. "As the world faces the largest refugee migration in history, many of who flee from religious persecution, the United States would be wise to pressure Pakistan and other governments through conditional benchmarks in our aid packages. A failure to do otherwise is unacceptable and reflects a squandering of a very valuable tool in the U.S. toolbox against extremism."

USCIRF said it was pleased the State Department included Pakistan in its most recent IRF report detailing religious persecution.

"The IRF Report is a comprehensive resource documenting religious freedom violations in almost 200 countries and territories and highlighting some of the thousands of prisoners of conscience who languish unjustly in prisons around the world solely because of their religion or belief," USCIRF Chairman Robert P. George said following the release of the State Department's report.

"We commend the State Department, particularly the Office of International Religious Freedom, led by Ambassador-at-Large David Saperstein, for the significant effort that went into compiling this report," George said.

"USCIRF urges the State Department to continue the current nine CPC designations," George continued. "We also urge the State Department to further expand its CPC list to reflect the severe violations occurring in other countries, such as Pakistan, which USCIRF has called the worst situation in the world for religious freedom for countries not currently designated by the U.S. government as CPCs."  Fox