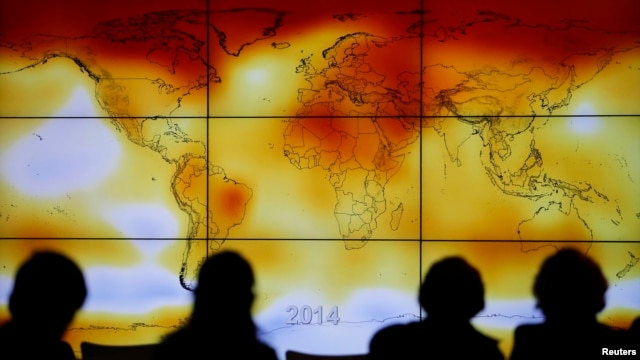 Soon after 2015 ended, it was proclaimed the hottest on record. The new report shows the broad extent of other records and near-records on the planet's climatic health. Those include record heat energy absorbed by the oceans and lowest groundwater storage levels globally, according to Tuesday's report from the National Oceanic and Atmospheric Administration.

"I think the time to call the doctor was years ago,'' NOAA climate monitoring chief Deke Arndt, co-editor of the report, said in an email. "We are awash in multiple symptoms.''

The 2015 State of the Climate report examined 50 different aspects of climate, including dramatic melting of Arctic sea ice and glaciers worldwide. A dozen different nations set hottest-year records, including Russia and China. South Africa had the hottest temperature ever recorded in the month of October: 119.1 degrees Fahrenheit (48.4 degrees Celsius).

"There is really only one word for this parade of shattered climate records: grim,'' said Georgia Tech climate scientist Kim Cobb, who wasn't part of the report but called it "exhaustive and thorough.''

But it's more than just numbers on a graph. Scientists said the turbocharged climate affected walrus and penguin populations and played a role in dangerous algae blooms, such as one off the Pacific Northwest coast. And there were brutal heat waves all over the world, with ones in India and Pakistan killing thousands of people.

Much of the intense weather occurred because of a combination of a natural El Nino — the periodic warming of parts of the Pacific that changes weather globally — and increasing man-made global warming.

"This impacts people. This is real life,'' said NOAA climate scientist Jessica Blunden, co-editor of the report, which was published Tuesday in the Bulletin of the American Meteorological Society.

Oklahoma University meteorology professor Jason Furtado said in an email that the report, which he wasn't part of, illustrates the combined power of nature and humans on Earth's climate: "It was like injecting an already amped-up climate system with a dose of [natural] steroids.''

About 450 scientists from around the world helped write the report, and in it NOAA highlighted one of the lesser-known measurements, ocean heat content. About 93 percent of the heat energy trapped by greenhouse gases — such as carbon dioxide from the burning of coal, oil and gas — goes directly into the ocean, the report said. And ocean heat content hit record levels both near the surface and deep.