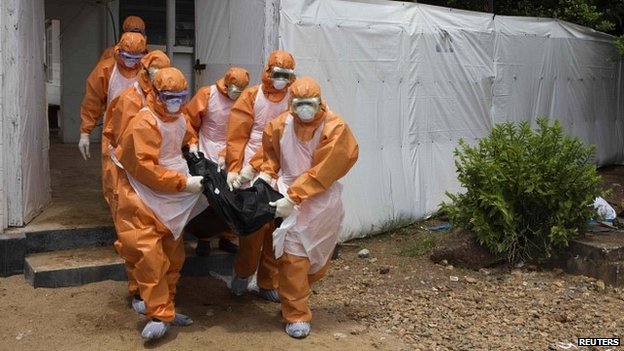 SIERRA LEONE - A leading charity has warned that a rate of five new Ebola cases an hour in Sierra Leone means healthcare demands are far outstripping supply. Save the Children said there were 765 new cases of Ebola reported in the West African state last week, while there are only 327 beds in the country.  Experts and politicians are set to meet in London to debate a global response to the crisis. It is the world’s worst outbreak of the virus, killing 3,338 people so far. There have been 7,178 confirmed cases, with Sierra Leone, Liberia and Guinea suffering the most. The number of people infected and dying from the disease is being vastly underreported. Save the Children says Ebola is spreading across Sierra Leone at a “terrifying rate,” with the number of new cases being recorded doubling every few weeks. It said that even as health authorities got on top of the outbreak in one area, it spread to another. The scale of the disease is also “massively unreported” according to the charity, because “untold numbers of children are dying anonymously at home or in the streets.” Earlier this month, Britain said it would build facilities for 700 new beds in Sierra Leone but the first of these will not be ready for weeks, and the rest may take months.
But Save the Children said that unless the international community radically stepped up its response, people would continue to die at home and risk infecting their family and the local community. “We are facing the frightening prospect of an epidemic which is spreading like wildfire across Sierra Leone, with the number of new cases doubling every three weeks,” said Rob MacGillivray, the charity’s country director in Sierra Leone. Safety trials for two experimental vaccines are under way in the UK and US, the WHO said on Wednesday, and will be expanded to 10 sites in Africa, Europe and North America in the coming weeks. It said it expected to begin small-scale use of the experimental vaccines in West Africa early next year. The Ebola Donors Conference in London on Thursday is being hosted by the UK and Sierra Leone governments. Its main agenda is to discuss what the global community can do to provide an effective international response to the epidemic. It will be chaired by UK Foreign Secretary Philip Hammond, who said he hoped it would “raise even greater awareness of the disease and what is needed to contain it, encourage ambitious pledges and show our solidarity with Sierra Leone and the region.”
However, the BBC’s Mark Doyle says Sierra Leone’s President Ernest Bai Koroma is unlikely to be able to attend. According to reports from the country’s capital Freetown, the British plane sent to Freetown to collect him has developed a technical fault. EP