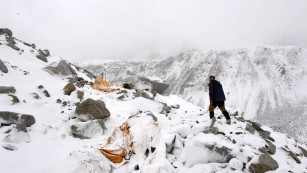 But the April 25 quake, which left more than 8,000 people dead, did not affect the height of the 8,848-meter mountain, according to the report by China's National Administration of Surveying, Mapping and Geoinformation.

Chinese state media reported the administration had set a satellite monitoring system on the peak in 2005 to observe the movement of the mountain.

In the decade since, Everest had been moving northeast at a speed of four centimeters a year, and had grown by 0.3 centimeter annually, state media reported.

The April earthquake reversed the direction of the mountain, shifting it to roughly where it would have been nine months earlier.

It triggered a number of avalanches on and around the mountain -- which is located at the border of Nepal and China -- claiming the lives of many climbers. The deaths led mountaineering companies to call off their climbs for the rest of the season.

New data showed a second deadly quake in Nepal, which struck on May 12 with a magnitude of 7.5, did not move the mountain, state media reported.

Previous analyses by seismologists have said that the mountain likely shifted by as much as meters in the quake, but the height was likely unchanged. CNN