Prophecy Dude - For the first time since WWII, Japan could authorize its military to fight abroad

For the first time since WWII, Japan could authorize its military to fight abroad 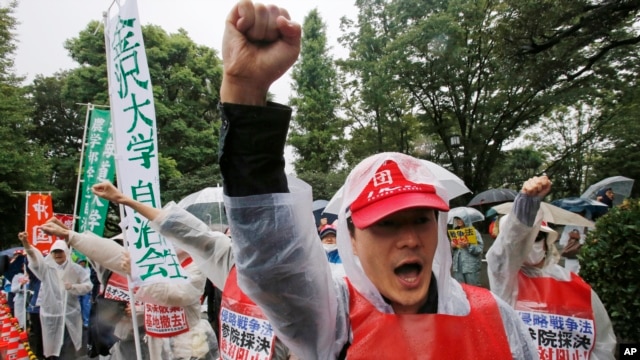 As Japanese lawmakers this week prepare to vote on controversial security bills that would authorize the military to fight abroad for the first time since World War II, thousands of pacifist opponents have mobilized against them in Tokyo.

The bills are expected to pass on Friday, but public opposition has been building in recent months, led by students who have organized rallies across the country.

Thousands rallied outside the Japanese parliament Thursday, where inside opposition members shouted objections and scuffled with members of the ruling Liberal Democratic Party coalition.

The security bills would revise 10 existing laws and give the military more latitude to defend its people and interests, to participate in collective self-defense and defend allies like the United States.

Prime Minister Shinzo Abe and his supporters argue Japan needs to counter potential threats from countries like China and North Korea that are increasing their own military and nuclear capabilities.

Opponents argue that the bills will violate Article 9 of the country’s postwar constitution that renounces the use of offensive force to wage war or settle international disputes, and entangle Japan in international conflicts.

“Most people are worried that the new legislation that lifts constitutional constraints from the Japanese military will mean that somehow, somewhere, sometime Japan will be dragged into war at Washington’s behest and that this won’t actually improve deterrence,” said Jeff Kingston, director of Asian Studies at Temple University in Tokyo.

Abe’s parliamentary coalition has the votes to pass legislation and is expected to do so by Friday, but this victory will come at a cost.  The last ditch efforts to disrupt and delay the bills have energized the opposition and turned public opinion against Abe.  One recent poll indicated 54 percent of respondents opposed the bills, while only 29 percent supported them.

The pacifists have promised to mobilize voters and target legislators who supported the bills in next year’s upper parliament house elections.  In recent elections the opposition has been frayed and voter turnout especially among the young has been low.

“So it makes it easy for conservatives having an aroused and loyal constituency to win elections when most people have basically turned off mainstream politics and tuned out,” Kingston said.

The end of pacifist Japan?

The protests over the security bills have reignited mainstream interest in the political debate, at least for now.

Washington supports the measures that would permit its ally Japan to take a more active role in regional security.

China and other countries in Asia that suffered under Japanese occupation during World War II have raise concerns that the measures signal Tokyo’s intent to again become an aggressive military power.

Kingston says the widespread protests reflect a strong pacifist strain that has become part of Japan’s psyche in the last 70 years. VoA