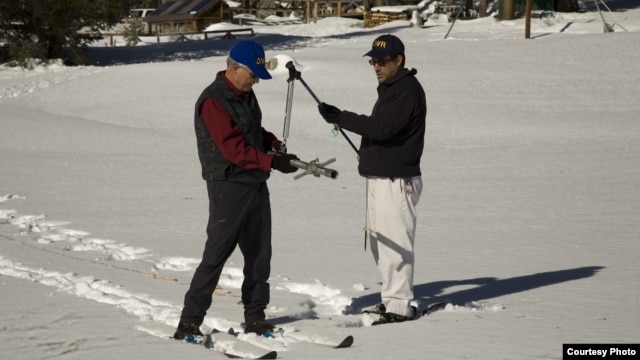 Global warming over the next century could significantly reduce the amount of winter snowpack in mountainous areas in the northern hemisphere, according to a new study published in Nature Climate Change.

Seasonal snowpack melt is an essential source of fresh water, and its loss could threaten drinking water supplies, agricultural irrigation and wildlife ecosystems.

Stanford University climate expert Noah Diffenbaugh led the study, which compares snowpack conditions across the northern hemisphere in the late 20th century with climate model projections for the next one hundred years.

Those projections are based on a range of scenarios which foresee a rise in average global temperatures of between two and four degrees Celsius.

The study concludes that average snow accumulation will decrease in most regions of the Western United States, Europe, Central Asia and the Himalayas, compared to historical patterns.

It projects that low and extremely low snow falls would exceed the lows of the later 20th century between 10 and 30 percent of the time with two degrees of warming.
California is the world’s sixth largest agricultural exporter and is dependent on snowpack for those crops. (California Dept. of Water Resources)
​​
And, Diffenbaugh says, "If the planet warms by 4 degrees Celsius, the United could experience snowpack accumulations below the levels of the late 20th century up to 80 percent of the years.”

The story is the same in other parts of the northern hemisphere, where snowpack is a natural, and critical, water reservoir.

The study finds that an early spring melt would bring more water into the watershed sooner than usual, potentially flooding rivers, lakes and artificially dammed-river reservoirs.

And with less water available later in the season, chances for more wildfires, pests, and species extinctions increase.

Diffenbaugh says this timing would also exacerbate drought conditions when the demand for water is greatest.

“We can infer that should these physical climate changes occur in the future, that there would be impacts on water supply for agriculture and for human consumption and for natural ecosystems if the water storage and management systems are not adapted to those changes.”

According to climate models, extreme rain events are expected to increase as the planet warms.

However, Diffenbaugh says, that won’t change how the snowpack responds to climate change.

“Even where there are increases in extreme precipitation in the models, there are still robust decreases in the amount of snowpack on the ground at the end of the winter and in robust changes in the timing of runoff.”

Frank Gehrke takes these findings very seriously. He heads the California Cooperative Snow Surveys program, which forecasts water flow from the mountains into man-made reservoirs that provide water for crops and people.

California is just one part of a broader picture discussed in the report. Since the state gets little rain in the spring and summer, Gehrke says timing of snow pack melt is critical.

He says he is seeing greater climate variation than ever before. “We’re having more extremes in terms of dry and wet years. We see that not only in our record, but also in discussions with a lot of other people who are studying climate.”
California will fine tune its snowpack measurements using new instruments on aircraft that can give water managers accurate data on snow accumulation and rate of melt. (NASA)
​​
Gehrke says California water managers need better measurement tools and higher resolution aerial images of the state’s snowpack than were available in the Stanford study. For that, the state has turned to the U.S. space agency’s Airborne Snow Observatory.

Flying at altitudes of about 7,000 meters, the photo-reconnaissance aircraft capture detailed images of mountain snowpack over a wide area, allowing scientists to more accurately compute the entire volume of water in a given watershed.

The NASA flights will also measure how much sun is reflected from the snowpack, which can indicate how fast it is likely to melt.  VOA