The amount of land currently being used to cultivate genetically-modified organisms (GMOs) is the highest it has ever been throughout the world, according to a new report. Data compiled by the International Service for the Acquisition of Agri-biotech Applications (ISAAA), a pro-GMO group whose stated mission is to increase crop productivity and alleviate poverty for resource-poor farmers, reveals that an astounding 420 million acres of land in 28 countries are currently growing GM crops. 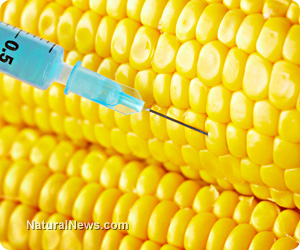 This amount is six percent higher than the roughly 410 million land acres that harbored GM crops in 2011, according to the report, and the majority of this rapid growth took place in developing countries. In fact, most of the growth in the GM crop sector throughout the past decade or more has taken place in developing countries, where biotechnology corporations apparently see the most profit and growth potential.

According to the ISAAA report, if every land acre currently sustaining GM crops was placed right next to each other, it would cover a land mass roughly the size of Alaska. And if all the land acres that have ever grown GMOs since the time they first hit the global market back in 1996 were combined, it would cover a land mass one-and-a-half times larger than the entire United States.

"The ISAAA says the area of land devoted to genetically modified crops has ballooned by 100 times since farmers first started growing the crop commercially in 1996," writes Jaeah Lee for Mother Jones. "Over the past 17 years, millions of farmers in 28 countries have planted and replanted GMO crop seeds on a cumulative 3.7 billion acres of land -- an area 50 percent larger than the total land mass of the United States."

Of the 28 countries that planted GMOs in 2012, 20 were developing and eight were industrialized. But in 2011, only 19 developing countries were cultivating GMOs, while 10 industrialized countries at that time were growing "Frankencrops." This seems to indicate that the developed world is gradually catching on to the fraud of GMOs and rejecting them, while an increasing number of developing nations are falling prey to biotech propaganda.

GMOs do not help farmers, increase crop yields, or benefit the environment
ISAAA presents this and other data on GMO growth in a positive light, claiming that Frankencrops have helped farmers get out of poverty and boost crop yields. But nothing could be further from the truth. As explained by Mother Jones, GMOs have led to a net increase in pesticide use; spurred the growth and spread of herbicide-resistant "superweeds;" and failed to improve crop yields.

"GMO crops have never been tested for safety," writes Emily Main for Rodale News about the experimental nature of GMOs. "The FDA determined they were 'safe' back in 1992, when the biotech companies that developed the crops provided the agency with their own test results, which can hardly be considered unbiased."  NaturalNews