Group of new immigrants from France arrives in Israel 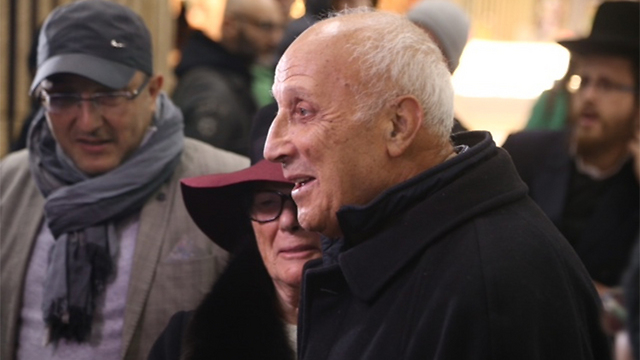 A group of 24 French immigrants arrived at Israel's Ben Gurion Airport on Monday and officially made Aliyah to Israel less than a week after the terror attack at a kosher supermarket in a suburb of Paris. Among the new olim is the family of Yohan Cohen who was killed during the attack in France and was laid to rest in the Givat Shaul cemetery in Jerusalem on Tuesday afternoon.

Simcha Felber, the World Zionist Organization's (WZO) representative in France, says that ever since the attack there has been increased interest among the French-Jewish community in immigration to Israel. He said the WZO would assess the situation for Jews wishing to immigrate to Israel. "Only in two to three weeks will we know if this is because of the mood or because of real intentions," Felber said.

Simon and Odette Alfasi, that were part of the group that recently immigrated to Israel, are planning to live close to their family in Haifa. "We finally made Aliyah in order to be in our home," said Simon.

"We will now live close to our family and grandchildren. We are very excited and happy to see everyone more often now. What is happening now in France is a catastrophe, there are a lot more who want to immigrate and now everyone will come because of the attack that happened," said Simon.

Matilda Pariente also arrived in Israel on Monday with her husband. In Paris, she had a long career as a school principal. Matilda said that on the Friday of the deadly attack she was on her way to the Hyper Cacher to buy cookies when she received a phone call that forced her to head home.

"Everyone thought that I was in the supermarket and that something happened to me. I had a lot of luck," she said.


On her decision to make Aliyah to Israel Matilda said: "For four months now I've been preparing myself. I sold my house and now I'm here, happy and content. All the French understand that the situation (in France) is difficult."

Lor Alkoby, 23, was also part of the new immigrants from France and plans to live in Jerusalem. "It is a big change for me. I basically left everything behind: family, friends and work. I always wanted to make Aliyah to Israel because it is my country. I set a date and it was today. I'm happy I fulfilled my dream."

Among the new Olim is Yael Yosef, 31, who said she decided to make Aliyah because of a Zionistic outlook. "It says in the Torah that the land of Israel is ours and because of this I came here, because of the commandment from God," says Yosef, who intendeds on living in Jerusalem.

Yosef added that the atmosphere in France is difficult after the wave of attacks and the rising tension between Muslims and Jews. "In France there are a lot of problems and the terror is on the rise. There is no future for Jews in France because it is very scary there, and I suggest all Jews immigrate to Israel because there is no longer anything to look for in France."

In the coming days, according to the Jewish Agency, more French Jews will arrive in Israel to make Aliyah. Some of them will live in youth centers across Israel. "The Jewish Agency helps all Jews that request to make Aliyah to Israel and works to eliminate barriers for employment. At the same time, we are working to strengthen the Jewish community in France, with security at Jewish institutions in the country among other thing," said Chairman of the Jewish Agency Natan Sharansky.