According to the Costa Rican Volcanology and Seismology Observatory (OVSICORI), after the magnitude 7.6 earthquake which occurred on September 5th, 2012, the country registered the highest level of earthquake activity it has seen in 62 years. 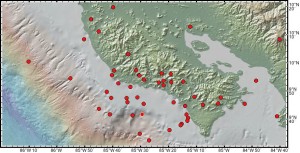 The strongest earthquakes in Costa Rican history occurred in 1950 in Nicoya, with a 7.8 magnitude quake, followed by the 2012 earthquake that occurred in the same area, of a 7.6 magnitude.

After the September 5th earthquake, OVSICORI reported 75 earthquakes that were felt by residents during the 4 months after the main event.