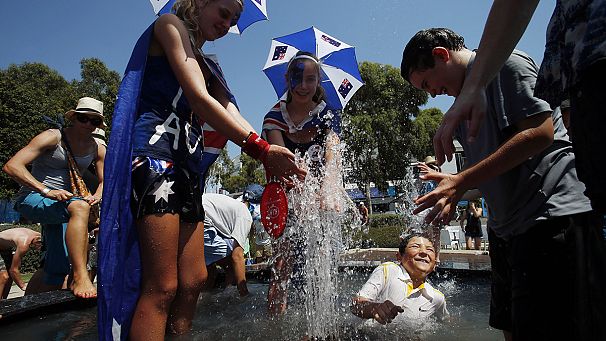 Australia can expect even longer and hotter heat waves than the one now scorching wide swathes of the country, a climate research group said on Thursday, raising questions about its long-term position as an agricultural powerhouse.

A blistering heat wave has settled over Australia’s south and southeast for nearly a week, with soaring temperatures causing worry after players and fans alike collapsed at the Australian Open Tennis Tournament in Melbourne.

Temperatures on Thursday continued to rise, with the mercury in Melbourne set to tick over at 44 Celsius (111 Fahrenheit), two degrees higher than Wednesday when one player, Canadian Frank Dancevic, hallucinated the cartoon dog Snoopy before fainting during a match.

Adelaide’s expected 46C, though, will earn the distinction of being the world’s hottest city on Thursday, according to the U.N. World Meteorological Organisation.

The privately run Climate Council, which includes former members of a government-funded climate change watchdog shut by Prime Minister Tony Abbott’s conservative government last year, warned in a report that Australia had only begun to feel the impact of climate change.

The heat wave, says the report’s author, Will Steffen, follows the felling of a host of temperature records in 2013, including the hottest year on record. “Australia has always had hot weather. However, climate change is loading the dice toward more extreme hot weather,” Steffen said.

Hoping to do avert disastrous climate change, Australia aims to reduce greenhouse gas emissions to 5 percent below 2000 levels by 2020, a target that requires a cut of 431 million tonnes of CO2 between now and 2020. The government released details of a A$1.55 billion ($1.37 bln) Emissions Reduction Fund (ERF) last month but some experts say design flaws and a lack of clarity mean it is unlikely to meet its climate targets.

Phil Cohn, co-founder of clean technology project developers Ramp Carbon, told Reuters the biggest problem with the ERF is that it sets no overall cap on emissions for Australia, meaning there would be no mechanism to ensure pollution doesn’t spiral.
“If we emit more in sectors that don’t participate much in the ERF auctions, we are going to miss the target,” he said.

Prolonged heat waves would threaten Australia’s agricultural production and undermine its policy of being the “food bowl of Asia”, analysts said. “It will be much harder to maintain production if you have such extreme weather events,” said Paul Deane, senior agricultural economist at ANZ Bank.

“Higher temperatures tends to lead to more evaporation of any rain, all of sudden the water availability for crops is reduced, which will have a big impact on crops like wheat and sugar.”

Australia is the world’s second largest wheat exporter and the third largest raw sugar exporter. While the wheat harvest is now complete for the 2013/14 season, saving broadacre farmers from the brunt of the current heat-wave, livestock farmers across the east coast are struggling.

Benchmark Australian beef prices, the Eastern Young Cattle Indicator, have fallen almost 10 percent in the last month as farmers, struggling to find sufficient water and food for animals, send increased numbers to slaughter. Australia’s cattle herd will fall to 25 million head during the 2013/14 season, the lowest since the 2009/10 season, due to increased slaughtering, the Australian Bureau of Agriculture and Resource Economics and Sciences said in December.

Australia must invest in greater research to understand how the intensifying heat waves will have an impact across a wide range of infrastructure, Steffen says. “It is essential that we understand the influence of climate change on heat waves to ensure that health services, transport providers, farmers and the community are prepared for what is happening now and what will happen increasingly in the future,” he said. EuroNews