Prophecy Dude - Increase in activity reported at volcanoes in Ecuador

Increase in activity reported at volcanoes in Ecuador 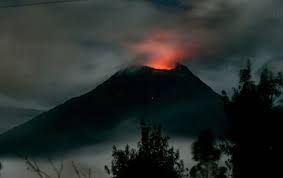 ECUADOR – Seismic activity of the Tungurahua volcano in central Ecuador Andean increased today after the two quakes struck near the volcanoes on Thursday; while the emissions released by the Reventador volcano remains high, as in recent days. This was reported by the Geophysical Institute (IG) of the National Polytechnic School, which closely monitors the behavior of the two active Ecuadorian volcanoes. In the case of Tungurahua, located about 80 kilometers south of Quito, the IG said in its latest report that the two earthquakes of 3.1 and 2.3 degrees on the Richter scale recorded last night, were due to the activity of the volcano. After these tremors, the Institute’s network of seismographs noticed an increase in activity, due to the pressure and rupture of rocks within the volcano. In the last 24 hours, the IG has detected 10 long period earthquakes mild, related to internal fluid movement, and has also noted the decline of black ash and thick debris over Palitahua, a town in southern colossus. The report states that last night the two earthquakes were located in the northwestern flank of the volcano, less than 12 kilometers deep, caused by the “fluid pressurization and mobilization” inside the mountain. Because of the cloud cover in the area has been impossible to make observations of the surface of the crater, the report said. The Tungurahua, 5,016 meters high, last December saw eruptive pulse generations, characterized by explosions, and a constant emission of steam and ash. In early January, the phenomenon briefly subsided, and seismic activity showed an apparent calm. This behavior is common in Tungurahua, whose eruptive process began in 1999, and has since interspersed periods of high activity and periods of relative quiet. Regarding Reventador volcano, located about 90 kilometers east of Quito in an unpopulated area of ​​the entrance to the Amazon, the IG said today there was high seismic activity, characterized by a constant tremor signal. That signal, high energy and low frequency, is maintained since last Tuesday and would be associated with the movement of fluids in the volcanic edifice. Although the dense cloud cover in the area has prevented scientists from making observations of the crater IG, seismic information warns of incandescent rockfalls from the flanks of the mountain. Reventador, of 3,485 meters, generating a large explosion in 2002 and launched into the air millions of tons of ash, by wind, they reached Quito, a city that was stained with a thick coat of that material.The Tungurahua and Reventador next to Sangay, are among the most active in Ecuador, which has more than fifty in all its geography, crossed by the so-called Pacific Ring of Fire. EP