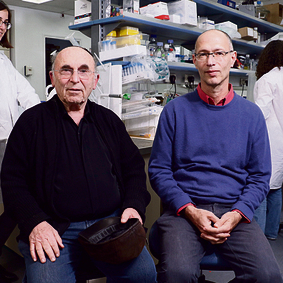 When a person is infected with HIV, the virus enters his blood cells and remains latent. Doctors don’t know when the virus' awakening process will begin or when it will duplicate itself to other cells.

Prof. Abraham Loyter and Prof. Assaf Friedler of the Hebrew University in Jerusalem began studying the issue, and following some successful research the Zyon Pharmaceutical company signed an exclusive agreement with the university to develop the medication.

The two scientists believe that the cells infected with the virus can be killed without harming the entire body, thereby curing the HIV carrier. How does it work? Instead of one copy of the virus' DNA which enters the carrier's cell, many copies will be inserted, leading to an activation of the cell's self-destruction mechanisms. The researchers have developed peptides (short chains of amino acid monomers) which cause this process.


These peptides, combined with the existing medications, were tested on cultures of human cells infected with the HIV virus. The results were promising: Within two weeks of treatment, there was no sign of the virus DNA or infected cells, and the virus was undetectable even two weeks after the end of the treatment. The researchers' conclusion was that not only can the virus infection be stopped, but that the infected cells can be destroyed too.

The research findings were published in the AIDS Research and Therapy journal, but many in the scientific community have expressed their reservations, saying "it is not a significant development."

But Patrick Levy, 50, the first executive director of the Israel AIDS Task Force who has been an HIV carrier for 28 years now, is optimistic.

"There are always reports about breakthroughs, so I try not to expect too much so as not to be disappointed," he says. "This time it looks like a very interesting breakthrough. If it has reached the point of a clinical trial on human beings, it's definitely a dramatic development and real news." YNetNews