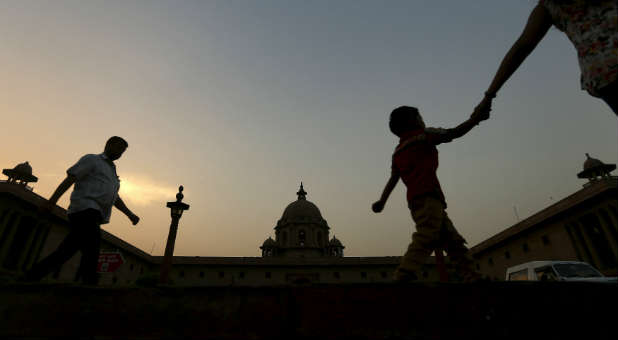 Disgraced journalists who've fabricated, exaggerated and stolen content for publication while working in secular media aren't alone in their disregard for truth-telling.

Christian writers fall prey to the same temptations, according to a journalism professor at Grace College and Seminary, where students' work is routinely checked with computer software that detects plagiarism.

Dr. Terry White, who teaches advanced news-writing at the Indiana-based Bible school, requires his students to pen stories about reporters—including Christians—who've fallen from grace inside newsrooms at the New York Times, Washington Post and USA Today.

An author himself, White speaks to Christian writers telling them that, in an age of moral relativism and cultural decline, truth is still a godly virtue that flows from holding to a biblical world view.

Amid the bad news of America's spiritual and moral slide, God's movement around the around the world should encourage speakers and writers to "write his answer right," White says.

"It is absolutely astounding how the Holy Spirit is working around the world, and we need to be telling this story," White told hundreds of writers at a recent conference in the Rocky Mountains.

But speakers and writers—both in Christian ministries and secular vocations—are ill-equipped if they're taking cues from the culture around them.

"What most of us are guilty of is a much more insidious kind of a problem: We do not have; we do not operate out of; and we do not write from a biblical worldview," says Marlene Bagnull, an author and book publisher who conducts writers' conferences in the United States.

James Sire writes about the hermeneutics—or the proper interpretation and application of scripture—of convenience in his book Scripture Twisting.

"The underlying assumption must be that God means what He says and says what He means," says White, who encourages Bible study as the plumb line for measuring the front-burner, American pop-culture issue of same-sex marriage and other hot-button topics.

"The primary voice of today's culture is people who are moving away from God—not towards Him—and their voices and messages just pour over us incessantly and, if we're not careful, we'll begin to go with the flow," White says.

Others like Jennifer Marshall, vice president of the Institute for Family, Community and Opportunity at the Washington, D.C.-based Heritage Foundation, use the phrase "a Genesis 1-2 view of the world" to describe God's ideal for marriage, family and sex.

"Secularists have twisted this unmercifully with their posture of intolerance," says White. "You have to buy into a position of neutrality, where we have to be tolerant and accept everybody."

This was vividly evident this March in Indiana—home to Grace College—where in White's words "shameful hypotheticals and unreasonable scare tactics" by opponents of the state's Religious Freedom Restoration Act (RFRA) produced a firestorm of protest from the public.

RFRA is intended to reinforce protection from government intrusion on individuals and institutions, which was supported by Gov. Mike Pence.

Beyond the need for proper interpretation and application of Scripture, White says there's a greater danger to preserving a biblical worldview—which he calls the locus of meaning—or the idea that words don't have meaning.

"In an age of relativism, few people want to hear the words 'absolute truth' because the idea is anachronistic," White says.

Encouraging Christian authors to write God's answers from an informed perspective, White says speakers and writers need a biblical view of worship, an accurate understanding of law and grace, a scriptural lens for homosexuality and marriage, a greater emphasis on truth in prosperity teaching, and God-inspired clarity on issues of life and death.

"Living as an evangelical (Christian) in America, it's easy to feel like there are really dark days ahead," White says. "While things may indeed be getting darker and more difficult for evangelicals in America," there's good news coming from around the world, particularly in Islamic strongholds, he says.

David Garrison, author of A Wind in the House of Islam and a scholar on world missions, says "movements" of God around the world are on the increase, a fact supported by empirical, verifiable evidence.

Garrison defines a movement as a period of two decades during which at least 1,000 newly baptized believers in Jesus Christ can be confirmed.

The first recorded movement in a Muslim country, where Christian baptism is a dicey proposition, began 300 years after the death of Muhammad, according to Garrison.

Then there were about 500 years of complete silence when no movement occurred.

In 1870 there was a movement in Indonesia, headed by a man named Sadrach, known as the Apostle of Java. And then in Ethiopia a sheik led 7,000 people to Jesus Christ, according to Garrison.

In 1965 there was an aborted Communist coup in Indonesia during which 500,000 people were murdered. The brutality led to an advance of the kingdom of God to include 2.8 million Indonesians who turned to Jesus Christ. Two million of them were Muslims.

According to Garrison, there were smaller movements in Bangladesh and Algeria, where 10,000 Berbers turned to Christ.

All totaled, there were 21 turning-to-Christ movements in the 19th century, and 11 in the 20th century.

And in the first 15 years of this century (2000-2015, there have been 69 recorded movements in which at least 1,000 Christians have been baptized, according to Garrison.

Author Glenn Sunshine, who teaches history at Central Connecticut State University, says there are 12 times more Christians in Indonesia today than 40 years ago; the country is the largest Muslim-populated nation in the world.

In India the born-again population has doubled in 10 years; in China Christianity is growing at a "mind-boggling rate," according to Sunshine, who holds a doctorate in European history. And in Africa, Christianity has grown 300 percent over the last 35 years.

White encourages believers to visit the website 30daysprayer.com for Muslims during Ramadan, which begins at sundown June 17 and continues through the evening of July 17, 2015.

Creeping secularization has defined Christians and American culture but it shouldn't obscure believers' views of God's movements around the world, White says.

"If we concentrate only on what's in front of us or in our little corner of the world, we can think that God is silent or that he isn't doing much at all.

"But a properly informed worldview will reveal that Christianity is racing ahead in many parts of the world, and particularly in the house of Islam," White says.

Writers, he says, can bring the balance and perspective that will encourage and reinforce believers who are going through hard times.

A former missions director for a Mexico-based outreach, Ron Mallet says he was privileged to hear White speak to Christian writers in Estes Park, Colorado.

"He's a marvelous speaker who puts a new twist on and epitomized the old truism, 'Good writing (speaking) is clear thinking made visible (audible),'" says Mallet, the author of a manuscript about science and how it confirms God's creative power throughout the universe.

Bagnull, director of the Colorado event and the Greater Philly Christian Writers Conference, agrees that improving biblical literacy and holding to a worldview that's shaped by God's Word is essential for speakers and authors who take seriously their call to "Write His Answer."

That idea, based on Habakkuk 2:2, is the theme of Bagnull's writers conferences in Philadelphia, which she founded in 1982, and in Colorado, where she has directed the annual event for 19 consecutive years.

"I best remember (White's) comment that churches need to quit drawing people by entertaining them, and focus instead on the hard truths that set Christianity far above all else that other religions and social systems offer.

"I like him so much I'm tempted to enroll in his journalism classes even though I'm approaching 78 in the years ahead," Mallet says. Charisma