Prophecy Dude - Jesus on Cover of 'Newsweek'—What Does This Mean?

Jesus on Cover of 'Newsweek'—What Does This Mean? 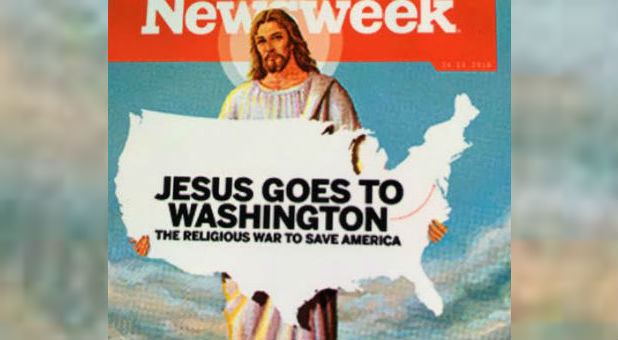 Coincidentally or providentially, Newsweek magazine decided to place Jesus on its cover immediately following two large prayer gatherings, one in D.C.! Inquiring minds want to know: "What's all this talk about Jesus Christ coming to our Nation's Capital?"

Having lived in Washington, D.C., for 24 years and worked across the street from the White House, I know it's unusual for this kind of talk and photo to be so prominent. A regular feature on a top-rated cable news show says it best: "What the heck just happened?"

Surveys reveal that over 80 percent of Americans feel our country is off track. Statistics continue revealing startling trends regarding our moral decline. People are reaching for answers, and it's an undisputed fact that multitudes are saying it's time to turn back to God!

Increasing numbers of citizens are saying the only way to "make America great again" is to get to the root problem, which is spiritual. And the starting point is to address leaders both spiritual and political.

One of the paramount problems in our nation still seems to be division, especially between races. Looking back at Ferguson and Baltimore and new incidents at political rallies, we all want to say that "black lives matter" except we don't want to be identified with some of the polarizing, manipulative tactics being used by agitators and race-baiters.

My wife and I celebrated our 40th wedding anniversary, not on the beach, but on our knees at times in the DC UnitedCry16 solemn assembly on Saturday. A central feature of this gathering was repentance and racial reconciliation. Members of Dr. Martin Luther King's family were present, and there were public repentance and humbling for past racial sins.

Why Was the Turnout Low?

While the "Azusa Now" event in the LA Coliseum drew between 40,000-50,000, UnitedCry had an estimated 3,000. The evening before, when an array of about 100 leaders gathered for prayer, the primary organizer brought a prophetic word on Gideon's army. Little did he know how serious the situation was to get.

We arrived at the beginning when Billy Graham's daughter, Ann, spoke powerfully as we all stood in pouring rain, sleet, icy winds and freezing temperatures! In advance, authorities alerted us that if the wind was at a certain level, they would have to close it down for safety. There is no doubt that the horrendous weather factor kept multitudes away.

Mike Berry, one of our leadership team, told me that in his lifetime he has participated in three such racial reconciliation events. Every one experienced brutal weather.

Jesus rebuked an ominous storm. Satan is called "the prince of the power of the air" (Eph. 2:2). Was what just occurred in the Nation's Capital coincidental? Satan "knows that his time is short" (Rev. 12:12).

For all who participated in Saturday's solemn assembly, we may have left a bit soaked, but we also left encouraged and greatly inspired by the experience. I personally believe that the adversary is stirring things up in the heavenly realms because he realizes that Jesus is coming to Washington and L.A. and Atlanta and Nashville and New York and every city with the spiritual awakening for which we all pray. Charisma