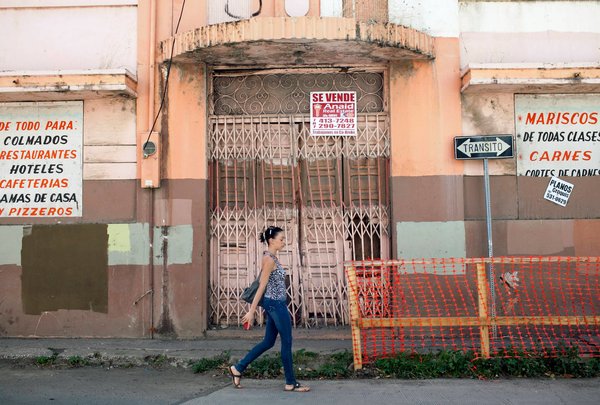 ECONOMY – Alexis Sotomayor has many reasons to stay in Puerto Rico: his two children; his mother and their gossip sessions over plates of fried rice; and the balm of salt and sun that leavens his life on the island. But the artisanal soap business that Mr. Sotomayor built is barely hanging on amid rising costs and taxes, and sales that have sunk by 40 percent in five years. Crime is rampant; his girlfriend was nearly carjacked at gunpoint recently. So last month he boarded a flight to Orlando, Fla., to interview for a job at a rum distillery in the hope of joining the ever-growing Puerto Rican diaspora. “I don’t see it improving,” said Mr. Sotomayor, a 47-year-old chemical engineer. “I see it getting worse. It’s the uncertainty. What am I going to do — wait until it gets worse?” Puerto Rico’s slow-motion economic crisis skidded to a new low last week when both Standard & Poor’s and Moody’s downgraded its debt to junk status, brushing aside a series of austerity measures taken by the new governor, including increasing taxes and rebalancing pensions. But that is only the latest in a sharp decline leading to widespread fears about Puerto Rico’s future. In the past eight years, Puerto Rico’s ticker tape of woes has stretched unabated: $70 billion in debt, a 15.4 percent unemployment rate, a soaring cost of living, pervasive crime, crumbling schools and a worrisome exodus of professionals and middle-class Puerto Ricans who have moved to places like Florida and Texas. The situation has grown so dire that this tropical island, known for its breathtaking beaches, salsero vibe and tax breaks, is now mentioned in the same breath as Detroit, with one significant difference.  Puerto Rico, a United States territory of 3.6 million people that is treated in large part like a state, cannot declare bankruptcy. From bottom to top, Puerto Ricans are watching it unfold with a mixture of disbelief and stoicism. Alejandro García Padilla, who was elected Puerto Rico’s governor by a sliver of a margin in 2012, said that after he began to wade deeply into the island’s economic and social quagmire, his fight-or-flight instincts kicked into high gear.
“I thought about asking for a recount,” Mr. García Padilla, 42, said with a grin during a recent interview in La Fortaleza, the 500-year-old government residence, recalling, among other things, the $2.2 billion deficit. “But now it’s too late.” A sense of pessimism pervades on the island. Streets are lined with empty storefronts in San Juan and in smaller cities like Mayagüez; small businesses, hit hard by high electricity, water and tax bills and hurt by drops in sales, have closed and stayed closed. Schools sit shuttered either because of disrepair or because of a dwindling number of students. In this typically convivial capital, communities have erected gates and bars to help thwart carjackers and home invaders. Illegal drugs, including high-level narcotrafficking, are one of the few growth industries. Puerto Rico, about 1,000 miles from Miami, has long been poor. Its per capita income is around $15,200, half that of Mississippi, the poorest state. Thirty-seven percent of all households receive food stamps; in Mississippi, the total is 22 percent. But the extended recession has hit the middle-class hardest of all, economists said. Jobs are still scarce, pension benefits for some are shrinking and budgets continue to tighten. Even many people with paychecks have chosen simply to parlay their United States citizenship into a new life on the mainland. Puerto Rico’s drop in population has far outpaced that of American states. In 2011 and 2012, the population fell by nearly 1 percent, according to census figures. From July 2012 to July 2013, it declined again by 1 percent, or about 36,000 people. That is more than seven times the drop in West Virginia, the state with the steepest population losses.
Coupled with a falling birthrate, the decline is raising worries about how Puerto Rico will thrive with a rapidly aging population and such a large share of jobless residents. Of the island’s 3.67 million people, only one million work in the formal economy. The island has one of the lowest labor participation rates in the world, with only 41.3 percent of working-age Puerto Ricans in jobs; one in four works for the government. “Today, Puerto Ricans with jobs are moving to the U.S.,” said Orlando Sotomayor, an economist at the University of Puerto Rico and the brother of Alexis. “Even people in their 40s and 50s, college professors with complete job security, are doing so. Some are starting all over. The phenomenon is highly uncommon and underscores the lack of hope that the ship can or will be righted.” The current exodus rivals the one in the 1950s, when job shortages on the island forced farmers and rural residents to find factory work in cities like New York and Boston. Today, it is doctors, teachers, engineers, nurses, professors who are leaving Puerto Rico behind. Just about everyone in Puerto Rico has a relative who left recently for Florida, New York, Texas or Virginia, among others. But the decision is never easy. Fathers leave behind children. Houses must be rented or sold at a loss in a glutted market. Businesses must be shut. And English must be polished, or in some cases learned, in a hurry.  Utopia