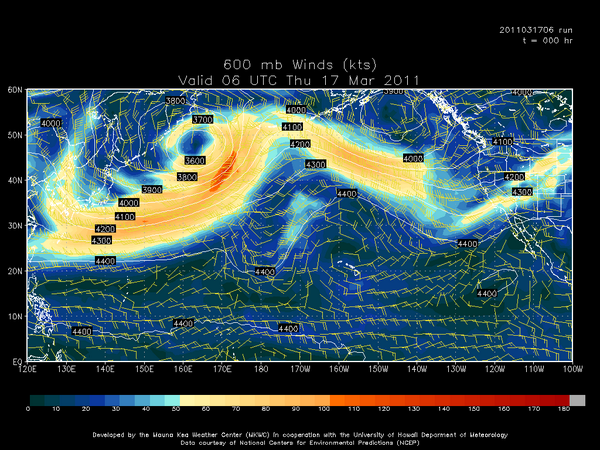 According to scientific modeling systems used by the European Union, the radioactive ocean plume released by the 2011 Fukushima nuclear disaster is likely to remain a massive clump of radioactivity until it slams into the West Coast of the United States in late 2017.

On March 11, 2011, a massive earthquake and tsunami struck Japan, knocking out power and cooling capability to the Fukushima Daiichi nuclear plant. Within three days, multiple meltdowns and reactor explosions had taken place. By March 25, massive amounts of radioactive material were observed leaking directly into the Pacific Ocean.

In 2013, the Nansen Environmental and Remote Sensing Center in Norway used computer models to project the movement and dispersion of this radioactive plume. Although the results of this study have been cited in official Chinese government documents, they have not been widely publicized.

Levels to remain high through at least 2026

Although delivering differing estimates of total radiation, both models concluded that the pollution would remain in a relatively unified mass and take the same path across the ocean until crashing up against western North America. Both models show the plume colliding with the U.S. West Coast and beginning to spread out starting around late 2017, with a maximum concentration of radiation hitting the coast toward the end of 2018.

Following this collision, the plume is projected to disperse and spread north, south and west, with portions of it eventually crashing back into East Asia sometime between 2021 and 2026. Throughout this entire time period, however, the area of greatest radioactivity concentration will remain positioned along North America’s West Coast.

More than three years after the disaster, the Fukushima plant remains crippled, contaminated and uncontained. Massive amounts of radioactive water continue to pile up at the plant and leak into the surrounding earth and ocean. Thus far, all plans by plant operator Tokyo Electric Power Co. (TEPCO) to stem the flow of this water by freezing the ground surrounding the plant have failed. More than 120,000 people evacuated from the area in 2011 are still unable to return to their homes, and criminal gangs have infiltrated cleanup operations.

In recent weeks, TEPCO has also been hit with a number of legal setbacks. A court ordered the company to pay nearly half a million dollars to the family of a woman who committed suicide just two months after being forcibly evacuated from her home near Fukushima. In August, a citizens’ judicial panel called for three former TEPCO executives to be prosecuted for their role in the disaster. TEPCO is also being sued by four workers seeking $600,000 in unpaid wages from their work in the plant’s clean-up and decommissioning operations.

“A year ago, the prime minister told the world that Fukushima was under control. But that’s not the case,” said Tsuguo Hirota, lawyer for the plaintiffs. “Workers are not getting promised hazard pay and skilled workers are leaving. It’s becoming a place for amateurs only, and that has to worry anyone who lives near the plant.” GlobalResearch

Sources for this article include: