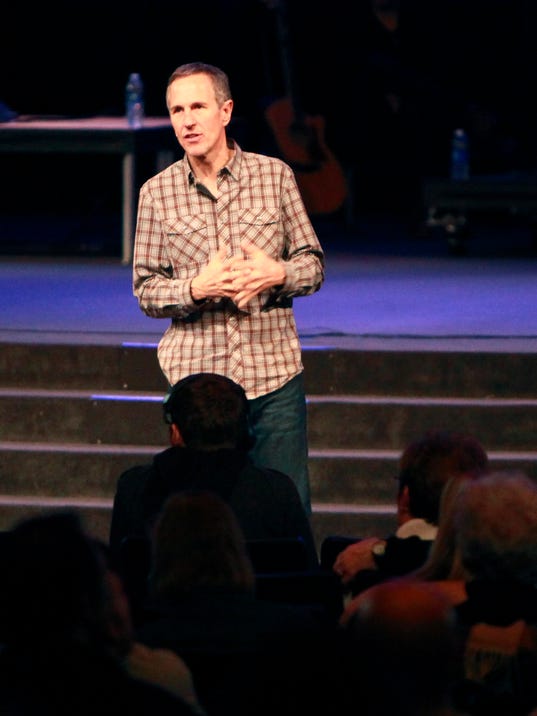 The Rev. John Lindell has spoken. He did it from one of the most powerful places in Southwest Missouri — the pulpit of James River Church, where he leads an Assemblies of God congregation that often tops 9,000 worshipers on Sundays.

He urged Christians living in the city limits of Springfield to vote to repeal the law and to leave church with a Yes-On-Repeal yard sign. Lindell hit two main points: the Bible is clear in its condemnation of homosexuality as sin and the ordinance is an infringement on the religious rights of Christians who believe so.

"This ordinance reduces freedom of religion to freedom of worship," he said. "In other words, you can believe what you want within the confines of the four walls of the church as long as you don't live it outside of the church."

Lindell has expressed his views on the topic before. I am not surprised he is mobilizing his church, which packs a powerful political punch through the sheer number of members and, I believe, their commitment to vote.

But I am surprised he delivered his message from on high — the pulpit.

I have met Pastor Lindell once, months ago. He was engaging, funny and gracious.

He told me Tuesday that he has every right to campaign for repeal in a sermon. Years ago, he spoke from the pulpit against the expansion of casino gambling in Missouri.

Over the next two Sundays he will continue to remind people to vote Yes and to take a Yes sign for their yard.

"Addressing this topic or the subject of the upcoming vote from the pulpit is not against the law in this country, although it may be in the future," Lindell said in the sermon. "Nor is it outside the parameters of a gospel ministry.

"Martin Luther, the great reformer, said this: 'If you preach the gospel in all aspects — with the exception of the issues which deal specifically with your time — you are not preaching the gospel at all.' "

A matter of free speech

How far can a pastor go in preaching the gospel when it comes to a political issue?

Churches are tax-exempt. As a result, the IRS has guidelines on their political activity. An IRS spokesman in St. Louis would not comment when asked if a pastor could speak from the pulpit to encourage congregants to vote a particular way on an issue.

But I did find this on the IRS website: A tax-exempt organization "may not attempt to influence legislation as a substantial part of its activities and it may not participate in any campaign activity for or against political candidates."

That seems to leave a lot of gray area.

"The mayor was not in favor of this ordinance," Lindell told his congregation. "He saw it for what it was. He saw it as bad government."

Stephens, in my opinion, has gone to great lengths to keep his position on the ordinance incomprehensible. He faces re-election April 7. I called Stephens and informed him Lindell had mentioned him in a sermon.

I asked the mayor, specifically, how he will vote on the matter April 7.

"I do not think, frankly, it is a matter of your business or Mr. Lindell's business or even my wife's business," Stephens told me.

He repeated what he has said in the past: He believes if the issue is to be addressed it should be done at the federal level.

Steven Reed, Stephens' opponent, had an easier time answering. He told me he will vote against repeal.

In his sermon, Lindell cites several verses to make his No. 1 point: homosexuality is a sin, according to the Bible, and Christians should vote for repeal.

"We all have desires that are warped as a result of our fallen nature: pride, selfishness, greed, anger, bitterness, unforgiveness, lust, envy, covetousness, chemical addiction," Lindell said.

Active homosexuals will not make it into heaven, Lindell said in the sermon.

"Homosexual activity will lead to destruction. A lot of people will say, 'I got that. I'm in on that. I believe that.' But you need to make sure you hear the second truth.

"Homosexual sin is not the only serious sin. Adultery, stealing, cheating, being abusive, being a drunkard can also keep you out of heaven."

I'm not sure I find that expansion of "serious sin" — cheating? — helpful or even hopeful in terms of my eternal afterlife. I take it to mean: Don't feel so bad, there are whole lot of other people hell-bound, too.

Obviously, I disagree with Lindell on the upcoming vote. I told him that.

I also told him that before I wrote this story, I transcribed his sermon. All 6,115 words of it.

It was titled "A Biblical Look at Human Sexuality." I find it telling that it contains 41 mentions of "sin," "sinners" and "sinfulness."

I gave Lindell a chance to respond to that tally. He said it makes sense that the word "sin" would appear multiple times in a Biblical discussion of homosexuality. The word "love" appears, Lindell said, because it would be unloving not to tell someone that when salvation is at stake.

Lindell then got personal with me. He told me he appreciated my column and my work at the News-Leader. "Although I don't think I'm going to 'love' this column." NewsLeader