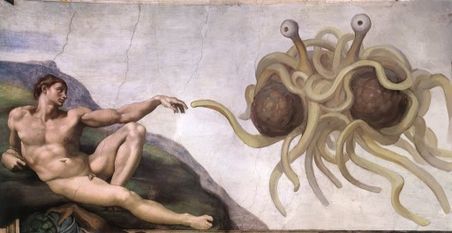 New Zealand has officially recognized its first marriage celebrant from the Church of the Flying Spaghetti Monster, a pirate-costumed “Pastafarian” who said Tuesday that all were welcome to join the offbeat religion.

Wellington management consultant Karen Martyn is an ordained “ministeroni” in the church, whose adherents wear colanders on their heads and believe the universe was created by a flying noodle.

It was recognized in New Zealand as a bona fide organization in December, resulting in Martyn recently becoming its first marriage celebrant.

Martyn rejected the suggestion it was a spoof church, saying it offered members the same benefits as other religions.

“We’re a community for each other,” she told AFP. “We share values and we want to be part of something, it’s human nature.”

However, she conceded that humor was an important part of the church, which preaches that there is a good beer volcano in heaven but the beer in hell is stale.

“We definitely believe that we should laugh at each other and laugh at everyone else,” she said.

“Nothing is sacred. There’s no dogma. We have our beliefs but recognize that all beliefs are open to challenge.”

Martyn said she was in discussions with several couples about conducting legally recognized weddings under the church’s auspices.

The “Flying Spaghetti Monster” movement developed in the United States about 10 years ago.

The church supreme leader is described on their website as “a heap of spaghetti appendages with two meatballs and a pair of eyes attached to the noodley body through a pair of stalks.”

In recognizing the church last December, New Zealand’s Registrar-General of Births, Deaths and Marriages Jeff Montgomery said it promoted a consistent set of beliefs and should be allowed to have its own marriage celebrants.“I have come to the view they do uphold or promote philosophical convictions and therefore are able to nominate marriage celebrants,” he said. BCN