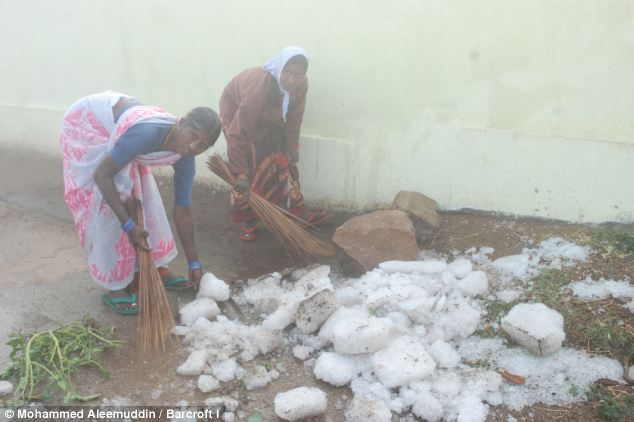 INDIA - Hailstones the size of boulders have rained down on villages in southern India. At least nine people were killed when the violent weather hit several villages in the state of Andhra Pradesh. The hailstorm which lasted for almost 20 minutes, destroyed crops, houses and live stock, causing devastating financial implications for residents. It was once-in-lifetime experience for people living in seven villages in Chevella, Moinabad and Shankarpally. The hailstones started falling from the sky on Tuesday night and covered the entire villages under the snow-like blanket. Some women were seen attempting to sweep up the massive boulders using flimsy brushes more suited to lighter debris. Dr K. Sitarama, director, Meteorological Centre Hyderabad, said: ‘The hailstorm was caused by an intense thunderstorm. ‘Such occurances are highly localized and restricted to a small area.’ The storm in the south was extremely rare as the deadliest hailstorms, and perhaps the largest hailstones, in the world occur on the Deccan Plateau of northern India and in Bangladesh. EP