Prophecy Dude - Over 50% of Palestinians back peace talks, survey finds

Over 50% of Palestinians back peace talks, survey finds 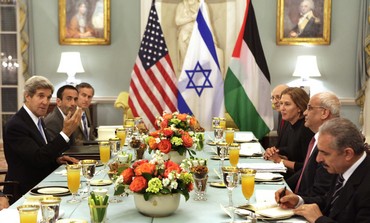 More than half of Palestinians support the resumption of peace talks with Israel, according to a public opinion poll published Tuesday.

The poll – conducted by Alpha International, an organization that aims to help decision-makers take “effective” decisions – also found that jailed Fatah leader Marwan Barghouti would win in a presidential election if Mahmoud Abbas does not run for another term.

The survey, conducted between July 31 and August 3, covered some 500 Palestinians from the West Bank and Gaza Strip and has a margin of error of 5 percent.

In addition, 43% of respondents said they had no problem with Saeb Erekat heading the Palestinian delegation to the talks, as opposed to 36% who rejected him.

Regarding the possibility of holding long-overdue presidential elections, an overwhelming majority of 69% said they were opposed to holding a new vote.

About 20% said presidential and legislative elections should take place only in the West Bank.

The poll found that Barghouti, who is serving five life terms in prison for his role in a series of terror attacks against Israelis during the second intifada, would defeat any other candidate if Abbas decided not to run.

The poll also showed that 45% of respondents were opposed to Fayyad’s return to power.  JPost