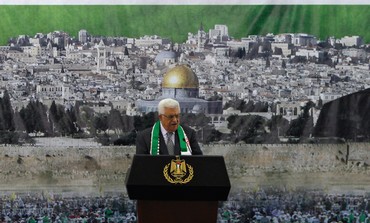 Palestinian Authority President Mahmoud Abbas declared Tuesday that he was planning to ask the UN General Assembly to upgrade the status of a Palestinian state to non-member on November 29.

He said that the vote on the Palestinian application would take place on the same day, which marks International Solidarity Day With The Palestinians.

Earlier, Abbas met with Egyptian President Mohamed Morsi and discussed with him the statehood bid.

Abbas said that the Palestinians were prepared to resume peace negotiations with Israel the day after the UN votes in favor of upgrading the status of a Palestinian state.

Abbas said that he agreed with Arab League foreign ministers with whom he met in Cairo late Monday that the application would be presented to the UN on November 29.

He said that although he expected "some obstacles," he was still confident that the statehood bid would succeed.

"Our hearts are open to the Americans and Israelis," Abbas said. "We have told them that when we obtain the status of non-member in the UN, we would be prepared to discuss the peace negotiations to talk about six or seven core issues."

Abbas said he also discussed with Morsi the repercussions of the statehood bid and Arab support for the Palestinians if they are subjected to financial sanctions.

Abbas claimed that Hamas supports his effort to upgrade the status of a Palestinian state. He also reiterated his commitment to the "right of return" for Palestinian refugees to their former homes inside Israel on the basis of UN resolution 194.