Survey of Polish students commissioned by Jewish community shows 44 percent would "not be happy" to have a Jewish neighbor. 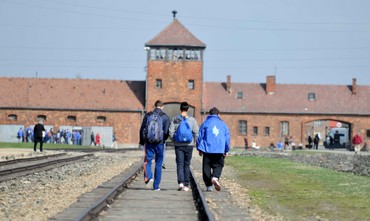 A survey conducted in recent weeks among high school students in Warsaw, Poland presented disturbing results on the extent of hatred towards Jews, with a shocking 44 percent saying the would not like to have a Jewish neighbor.

1250 students, ages 17-18, were surveyed by the "Homo Homini" Institute of Public Opinion Research and commissioned by the Jewish community in Poland, showed surprising anti-Semitic views, with 40 percent of the respondents saying they would not like to have a Jewish classmate.

60 percent of the respondents said they would not like to have a Jewish partner, whilst 45 percent said they "would not be happy” if they had a Jewish relative.

When asked about the Holocaust, the Polish students did not hide their anti-Jewish opinions and showed poor knowledge of the Jewish history of Poland.

Most of the students believed that the percentage of Jews living in Warsaw before the World War II was 18 percent, while the then actual percentage of Warsaw Jews was 30 percent.

Forty-four percent believed that "Poles and Jews suffered equally during the Holocaust". 27 percent said that the Jews suffered more and 24.7 percent claimed that suffering of the Poles was larger, according to the poll.

However, most of students who took part in the survey, 55.8 percent, correctly named Mordechai Anielewicz as the leader of the Jewish uprising.

68.3 percent knew the exact date of the uprising, while 23 percent thought that "The uprising ended with a victory of the rebels." Joanna Korzeniewska, a spokesperson for the Jewish community of Poland, said the results of the study will "help us in planning social and educational activities in the future. As it now turns out, we need them even more than we thought before." Dr. Michal Bilewicz, from the Center for Prejudice research at the Warsaw University, said the results were disturbing.

"The answers were disappointing, given the fact that 90 percent of Poland’s Jews were murdered during the holocaust while 10 percent of the Poles suffered the same faith.

"Warsaw, which is considered to be the city with the highest number of educated people, is presented in this survey in a very negative way. The survey reflects the level of the Polish education system. Hatred towards Jews is one of the results of the low level of education on this issue," he said.

On Friday, Poland marked 70 years for the Warsaw ghetto uprising, but the lesson, it seems, was not yet learned. JPost