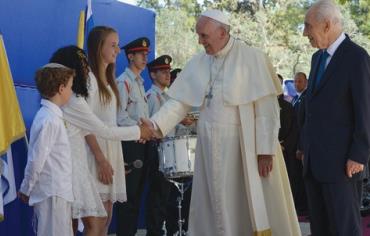 President Shimon Peres left for Rome on Sunday morning to participate in a prayer for peace in the Middle East with Pope Francis, Palestinian Authority President Mahmoud Abbas, Eastern Orthodox Patriarch Bartholomew and spiritual representatives of the Jewish, Muslim, Christian and Druse faiths.

Peres and Abbas will not be traveling to Rome together, as the PA president is due to arrive from Egypt.

At the behest of Sephardi Chief Rabbi Yitzhak Yosef, Peres asked that the prayer ceremony be held in a neutral part of the Vatican, and not in a chapel, so as not to violate Jewish religious dictates that forbid Jews to pray in a church.

The participants are to meet with the pope prior to joining in the prayer for peace, which is to take place in the garden of the Vatican.

The prayer session has been divided into sections for each faith, in which Jewish, Christian and Muslim religious leaders are to read verses relating to peace from the Bible, the New Testament and the Koran.

Following the readings, Francis, Peres and Abbas are to read verses that each has personally chosen.

The ceremony is set to be screened on television in Israel at 8 p.m. on Sunday.

The Vatican is preparing to provide a live feed of the event to billions of people of faith across the world.

Peres, who is to head a delegation of rabbis and Druse spiritual leaders, has received a blessing from Yosef for the success of his mission.

While in the garden of the Vatican, Peres is expected to issue a call to leaders of all faiths to ask their followers to condemn terrorism and to do all in their power to eradicate it.