Synagogue in Siberia Damaged by Meteorite

A synagogue in Siberia was lightly damaged by a meteorite that fell nearby. 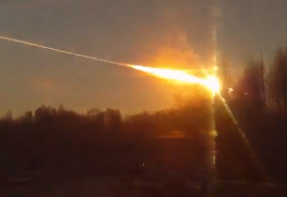 On Friday, Rabbi Yechiel Michel Levitin, director of the Or Avner Jewish day school in Chelyabinsk, a city located 1,000 miles east of Moscow, was quoted by an
Israeli website as saying congregants heard a huge explosion during morning prayers followed by a bright flash that lit up the sky.

"Glasses shattered and people tried to escape, but they weren't sure were to go," Levitin told COL, a media outlet affiliated with Chabad. "Outside we were told a meteor had fallen from the space."

Media on Friday reported a suspected extraterrestrial object had landed somewhere in western Siberia. Videos posted on YouTube by drivers in the area showed a bright orb streaking the early morning sky.

Levitin uploaded photos of the Chelyabisnk synagogue's stained-glass windows, which he said were shattered by the shock waves. The rabbi said one congregant was spared serious injury when a large shard of glass landed in his seat seconds after he went to the window to investigate the cause of the blast.

"It was a real miracle," Levitin said, according to COL. Levitin said authorities were telling residents to stay indoors while they were investigating the incident. VJ