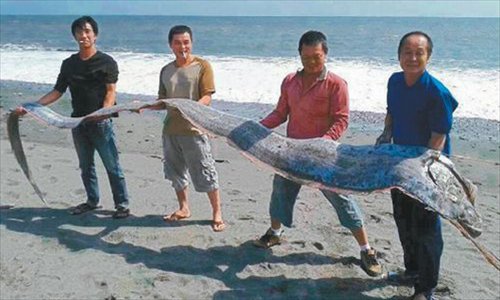 A 5-meter oarfish, a giant eel-like fish from the deep rarely seen alive, was caught at a beach nearby Seaside Park in Taitung, Taiwan on October 28.

An amateur fisherman of 20 years surnamed Guo struggled for nearly 40 minutes to reel in the 60-kilogram creature.

Shocked at its size, Guo called on friends to help carry the catch back home for a celebratory feast.

In the rare cases an oarfish is caught, it is usually in deep sea fishing nets offshore and are rarely with fishing rods, explained local marine biologist surnamed Chen.

Known in Chinese as a dizhenyu or, earthquake fish, oarfish are known to have washed up on shores before and after major earthquakes.

The catch follows two equally rare oarfish encounters on the coast of California earlier this month, sparking concerns of an impending earthquake.

Recent cases linking quakes and oarfish include the Tohoku earthquake in 2011 off the Japanese coast that resulted in a tsunami and 20 oarfish washed up on nearby beaches, and an 8.8 magnitude earthquake in Chile back in 2010.  GlobalTimes