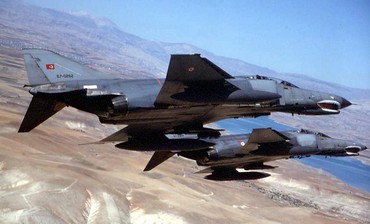 HACIPASA - Turkey scrambled two fighter planes to the border with Syria on Friday after a Syrian military helicopter bombed the Syrian border town of Azmarin, a Reuters witness said.

There has been intense fighting between rebels and Syrian government forces this week in Azmarin and neighboring towns, an area strongly opposed to President Bashar Assad's rule.

Shells fired onto the town from surrounding hills sent thick plumes of smoke and dust rising into the air during fighting on Thursday and a voice amplified through loudspeakers, audible from the village of Hacipasa in Turkey's Hatay province, called on rebel fighters to surrender, warning of an air assault.

Fighting along Turkey's 900 kilometers (560-mile) border with Syria has repeatedly spilled over into Turkish territory in the past week, with the Turkish army responding in kind to gunfire and mortar shells fired from Syria.

Turkish Chief of Staff General Necdet Ozel said on Wednesday his troops would respond "with greater force" if the shells continued to land on Turkish soil, and parliament last week authorized the deployment of troops beyond Turkey, heightening fears that Syria's civil war would drag in regional powers.  JPress