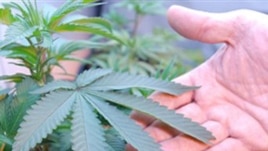 Colorado and Washington state passed referendums Tuesday approving the recreational use of marijuana for adults 21 or older - the first time states have approved such a measure.  A similar ballot measure failed in Oregon.  A number of states and the District of Columbia have laws permitting marijuana for medical use.

Colorado Governor John Hickenlooper, a Democrat who opposed the measure, said negotiations with U.S. authorities are needed because marijuana is prohibited by the federal government.

"The voters were pretty clear what they feel and what they want," he said.  "Within the limits of federal law, of whatever the federal government will permit, we have to figure out how we are going to go forward.''

He warned that marijuana is still an illegal drug under federal law.

Supporters have argued that legalizing and taxing marijuana would be better than costly government anti-drug efforts.

The co-director of a pro-marijuana campaign in Colorado, Mason Tvert, told reporters that voters want to stop what he called a "failed, ineffective, wasteful policy of prohibition. "We are trying a new and more sensible approach and we certainly hope the federal government will work with our state."

The Drug Free America Foundation said the measure in both states is endangering public health and safety.

“It is truly unfortunate that the residents of these states chose to legalize a dangerous addictive drug," said Calvina Fay, executive director of the foundation.  “It is equally disturbing that voters put their states in the untenable position of a constitutional showdown with the federal government where marijuana remains illegal.”

The Justice Department said enforcement of the federal Controlled Substances Act "remains unchanged.''  It said it is reviewing the ballot initiatives and has no additional comment at this time.  VOA