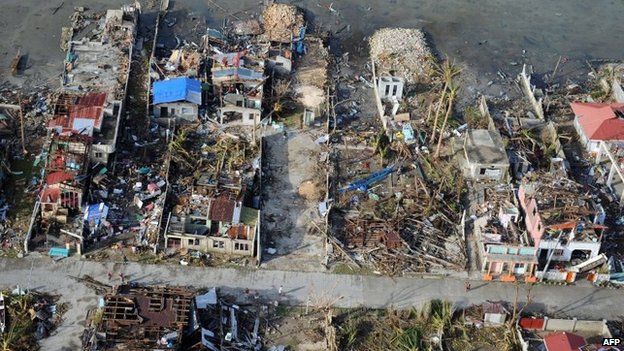 Philippine President Benigno Aquino has declared a state of national calamity to speed relief efforts for victims of Typhoon Haiyan.

In a statement, he said the two worst affected provinces, Leyte and Samar, had suffered massive destruction and loss of life.

Thousands of survivors are still desperately waiting for the aid effort to reach them.

At least 10,000 people are feared to have been killed.

Tacloban is one of the worst affected cities. The BBC's Jon Donnison, who is there, says there does not yet seem to be an effective operation to get help to those in need.

This is expected to change over the next few days, he says.

"One shirt. That's all I'm asking for": The BBC hears survivors' stories

Hundreds of thousands more people have been displaced after the high winds and floodwaters destroyed their homes. Damage to roads and airports has delayed the delivery of aid.

The UN Secretary General Ban Ki-moon said the UN would launch a large-scale humanitarian plan on Tuesday. He called for UN member states to show solidarity with the people of the Philippines.
Continue reading the main story
“Start Quote

Auntie, we need help! Please! We are okay but the house is destroyed”

"We have all seen the heartbreaking images of the impact of this huge storm," he said.

One of the most powerful storms on record to make landfall, Haiyan - named "Yolanda" by Philippine authorities - struck the coastal provinces of Leyte and Samar on Friday.

More than nine million people have been affected in the Philippines. Many are now struggling to survive without food, shelter or clean drinking water.

A picture is slowly emerging of the full damage wrought by the storm:

The exposed easterly town of Guiuan, Samar province - population 40,000 - is said to be largely destroyed
Three-hundred people were killed in the town of Basey, also in Samar, the provincial disaster office confirmed
Tacloban, Leyte province, was largely flattened by a massive storm surge and scores of corpses are piled by the roadside, leaving a stench in the air as they rot. Hundreds of people gathered at the airport desperate for food and water, others trying to get a flight out
Disaster worker Dennis Chong told the BBC that assessments in the far north of Cebu province had shown some towns had suffered "80-90% damage"
Baco, a city of 35,000 in Oriental Mindoro province, was 80% under water, the UN said.

A huge international relief effort is under way, but rescue workers have struggled to reach areas cut off since the storm.

However, reports from Tacloban say soldiers have been distributing food and water to some residents and the US military has sent marines to the city.

The head of the Philippine Red Cross, Richard Gordon, described the situation as "absolute bedlam".

"It's only now that they were able to get in and we're beginning just to bring in the necessary food items... as well as water and other things that they need," he told the BBC.

A Philippine military spokesman was quoted as saying on Monday that 942 people had died in the typhoon's aftermath, though it is clear the official death toll will rise significantly.

Some 660,000 people have been displaced, according to UN figures, among a total of 9.8 million affected.

The UN's Under-Secretary General for Humanitarian Affairs, Valerie Amos, was is her way to the Philippines.

A priority of the UN's response teams once on the ground would be the burial of bodies to meet concerns about public health, UN humanitarian official John Ging said.

Some are questioning what more authorities could have done to prepare for this, just the latest in a string of disasters to hit the nation of more than 7,000 islands.

Authorities had evacuated hundreds of thousands of people before the typhoon arrived, but many evacuation centres - schools, churches and government buildings - proved unable to withstand the winds and storm surges.Haiyan brought sustained winds of 235km/h (147mph), with gusts of 275 km/h (170 mph) and waves as high as 15m (45ft). In some places, as much as 400mm (15.75 inches) of rain fell.

Officials said looting was widespread and order was proving difficult to enforce. Correspondents say many ordinary people are simply scavenging for the food and water needed to survive.

In some areas, the dead are being buried in mass graves.

American military aircraft and ships are being deployed to provide help. Aid is being flown into the only regional international airport at Cebu, with relief efforts focusing on Tacloban.

Other countries have also pledged millions of dollars in assistance. Britain is earmarking £10m ($15); Australia has approved $9m in humanitarian aid to the Philippines; while New Zealand has pledged over $1m.

Typhoon Haiyan later made landfall in Vietnam, near the tourist destination of Ha Long Bay, with sustained winds of up to 140 km/h (85mph).

Despite losing much of its strength, the storm still felled trees and damaged buildings, with reports of some casualties.

Some 600,000 people were evacuated in northern provinces of the country.  BBC