Looking for the United States in Prophecy 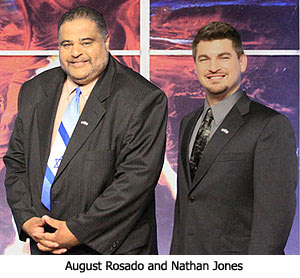 Nathan Jones: Let's answer your first question: "Why are people always looking for America in Bible prophecy?" It's as if the United States is the only country on the planet. An Australian once wrote me and said, "American's always think they are in the middle of everything." That is so true. We are obsessed with the idea that America is in Bible prophecy.

I think why Americans are so curious about the US being in Bible prophecy is because we interpret Bible prophecy based on current events. What is in the newspapers today? Right now, politically and socially, the United States exerts more power than any other nation.

But, people have a hard time understanding that the Tribulation is a time period unlike any other. The total political systems of the world, the economic systems, the social systems, the religious systems — they will all be vastly different during the Tribulation than they are today. We can't look at the way the world is currently set up and conclude that today's world is also the world of the Tribulation, because the Bible paints a very different picture of what that future time period will look like than how it presently is arranged.

August, to address your second question: "Where do people get the idea that the United States is in Bible prophecy?" Obviously, the Bible doesn't right out write "The United States of America" or any name similar. It's just not named, so people have to infer it in Scripture.

Isaiah 18 — Tall and Smooth People
The chapters you gave plus some others are the ones that I would have given that people look to. People turn to Isaiah 18 where it talks about a tall and smooth people who are feared far and wide that live in a nation which is powerful and a river divides it. People will then conclude, "Look! The Mississippi separates the United States. It is a powerful nation. Therefore, Isaiah 18 must be about the United States." But, you've got to look at context whenever you are interpreting Bible prophecy. We must look at the context, and that context is about the land of Cush, which is modern-day Ethiopia. The dividing river is the Nile River. So, Isaiah 18 clearly isn't a prophecy about the United States.

Ezekiel 38 — Village of Tarshish
A second scripture people will turn to find the United States in Bible prophecy is the mention of the village of Tarshish, which is found in Ezekiel 38. Ezekiel 38 concerns the Gog-Magog Battle, when Russia and an outer ring from Israel of Islamic nations will come against Israel. God will supernaturally destroy this vast army, and then the whole world will know that God is truly on the scene. The supernatural defeat is God's return back in the public's eye again. People will specifically read Ezekiel 38:13, which talks about the merchants of Tarshish and its villages, or young lions, depending on the translation. They will conclude, "Tarshish is England, therefore the young lions must be its colonies: the United States, Canada, Australia, and countries like us."

Of any of the possible biblical reference to the United States in Bible prophecy, I would say that Ezekiel 38:13 is the best possibility. But, then again, we really don't know that Tarshish is England. The people of Ezekiel's time thought the end of the world — Tarshish — was Spain, so that would really make the young lions then the hispanic nations of South and Central America. Therefore, this verse then becomes a hard one to pin on the United States.

Anyway, if Ezekiel 38:13 contains a reference to the United States, the country we are told in that passage sits the battle out and lets Russia and those Islamic nations attack Israel. These young lions sit out the battle and barely give it a protest, which when you think about it, sounds exactly like what our current administration would do.

Again, the United States is one of all the nations set against Israel. It's not the Antichrist's empire that controls the entire world. So, to use that reference is really an attempt to try and pigeon-toe the United States into that Babylon entity. I don't believe that's the case there in Revelation 17-18.

Clearly the Antichrist does not rise out of the United States. He rises out of the revived Roman Empire according to Daniel 9, so therefore I have to conclude that the United States isn't the one world religious or political system of the Tribulation time period.

General Prophecies
I do see the United States in some general prophecies, prophecies that don't state the United States specifically, but would concern the United States. Take for example Isaiah 34:2-3 which declares that all the nations will be judged for their behavior against Israel. Certainly when the United States tries to separate Israel's land and divide it — the Two State Solution — we always seem to get hit by God weather-wise as a reminder not to harm the "apple of God's eye."

August Rosado: Yes, I agree with you there, Nathan.

I was reading the Biblical Archaeology Review magazine. It's one of my favorite magazines for being updated on recent archaeological discoveries. Hershel Shanks did a segment on ancient Tarshish, and he said that archaeologists actually found ancient Tarshish, which is known today as modern-day Tartessos which is in southern Spain. But, these guys who try to find America in prophecy will say that Tarshish is Great Britain's colonies like Australia and the United States, founded by English speaking immigrants. That just doesn't fit the bill at all. Tarshish is located in southern Spain, not in America, not in Great Britain, and certainly not in Australia.

Getting back to Isaiah 18, these guys who say they have found America there in that prophecy will also say that's America because it says "woe to the lands shadowing with wings," and wings are a symbol of the United States. Then as you said they go to Revelation 12 about the great eagle's wings and conclude that must again be referring to America. The main problem with their interpretation is that these guys allegorize and spiritualize the Bible to make it sound anyway that they want.  Lamb and Lion