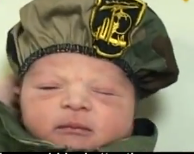 The Lebanese Hezbollah terrorist organization accepts babies onto its ranks, at least according to a recent report on its Al-Manar television.

The report, which aired on January 18 and was translated by the Middle East Media Research Institute (MEMRI), was filmed in a Lebanese hospital and showed a baby dressed in the military fatigues of Hezbollah.

"Military fatigues were the first garment to touch his tender body," said the reporter, adding that the baby, Mahdi. "is a potential resistance fighter from the first hours of his life."

The newborn's mother is shown saying, "Nothing could be better than him becoming a soldier of Imam Mahdi. This reflects the continuation of the path of the Islamic resistance, one generation after another."

Terrorist groups are known for instilling their doctrines in children starting at an early age. In 2012, Al-Manar showed the grandson of the assassinated Hezbollah arch-terrorist Imad Mughniyeh, who proudly boasted that he "wants to be in the resistance like grandpa."


MEMRI previously showed that the Hamas terror organization, which rules Gaza, also tried to reach out to children by airing a cartoon promoting its "military wing", the Izz Al-Din Al-Qassam Brigades. VJ