COLOMBIA - According to the Volcanological and Seismological Observatory of Manizales, an earthquake measuring 2.6 on the Richter scale occurred yesterday at 11:54 am. The statement also notes that the incident “is associated with rock fracturing within the volcanic edifice.” The volcano-tectonic earthquake was presented to the southeast of the main dome at a depth of 12.33 miles. Although the movement was felt in the district Tapias, rural Ibagué, Eduardo Rodríguez, director of the Departmental Committee for Risk Management, confirmed that no emergencies have been reported so far. The Cerro Machin volcano alert remains yellow. There have been three earthquakes reported in the vicinity of the volcano within a week. On Sunday two movements were recorded at 9:32 and 9:35 pm with a magnitude of 4.6 and 3.9 on the Richter scale, respectively, located 12 kilometers southeast of depth to the main dome. The two municipalities where the tremors were felt are Cajamarca and Ibague. Cerro Machin last erupted 800 years ago. 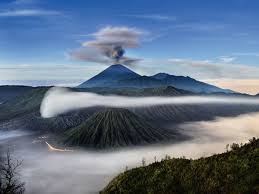 El Hierro: It seems a new earthquake swarm has started at El Hierro volcano yesterday, when the number of quakes rose from an average of about 8-10 to 23 quakes per day. Today, so far there have been 14 events recorded, and their number is likely to rise further. The quakes are very small (mostly under M1, largest M2.0) and are concentrated at about 10 km depth in the western El Golfo and scattered in the SW part of the island at greater depths.
Iceland: A new earthquake swarm occurred over the weekend on the Iceland’s Reykjanes peninsula, on the volcanic rift zone about 12 km SW of Brenisteinsfjöll volcano. The largest quake was a M3.8 event at 5 km depth on Friday at 19:42 UTC.


Yellowstone: A minor seismic swarm occurred at Yellowstone, but falls into what is normal activity at a large active caldera.  EP