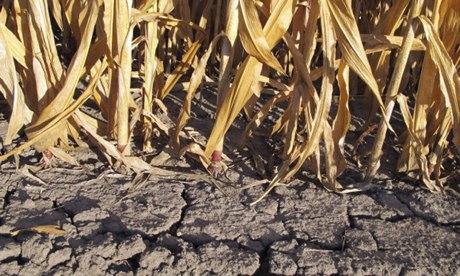 An international scientific research project known as the Inter-Sectoral Impact Model Intercomparison Project (ISI-MIP), run by 30 teams from 12 countries, has attempted to understand the severity and scale of global impacts of climate change. The project compares model projections on water scarcity, crop yields, disease, floods among other issues to see how they could interact.

The series of papers published by the Proceedings for the National Academy of Sciences (PNAS) shows that policymakers might be underestimating the social and economic consequences of climate change due to insufficient attention on how different climate risks are interconnected.
Europe, North America at risk

One paper whose lead author is Franziska Piontek of the Potsdam Institute for Climate Impact Research explores impacts related to "water, agriculture, ecosystems, and malaria at different levels of global warming." The study concludes that:

"... uncertainty arising from the impact models is considerable, and larger than that from the climate models. In a low probability-high impact worst-case assessment, almost the whole inhabited world is at risk for multisectoral pressures."

The uncertainties in the model are large enough that they may "mask" the risk of a "worst case" scenario of "multisectoral hotspots," where impacts affecting "water, agriculture, ecosystems, and health" overlap in ways that could affect "all the world's inhabited areas."

In the worst-case analysis, "Almost the entire global population is exposed to multisectoral pressure" at global mean temperatures of around 4C higher, with "roughly 18% of the global population" projected to "experience severe pressure in all four sectors. The affected regions are in Europe, North America, and south-east Asia."

How likely is this scenario? The study points out that:

"This worst case is rather extreme, but nonetheless it represents the upper end of the risk spectrum in light of the large uncertainties."

Other papers point to significant risks that are much more likely on a business-as-usual emissions trajectory.

A study led by Jacob Schewe of Potsdam finds that "the combination of unmitigated climate change and further population growth will expose a significant fraction of the world population" - potentially as much as "100%" - to "chronic or absolute water scarcity."

About 2.7C above preindustrial temperatures:

"... will confront an additional approximate 15% of the global population with a severe decrease in water resources and will increase the number of people living under absolute water scarcity (<500m3 per capita per year) by another 40% (according to some models, more than 100%) compared with the effect of population growth alone."

The Mediterranean, the Middle East, the southern United States and southern China, for example, could see a "pronounced decrease of available water," while southern India, western China, and parts of eastern Africa could see an increase.

The study results represent the multiple-model average of 11 hydrological models produced by five different climate models. While some areas like southern India, western China and eastern Africa could see an increase of available water, others like the Mediterranean, the Middle East, the southern United States and southern China, would see a "pronounced decrease of available water" without curbs in greenhouse gas emissions.
Agricultural collapse

Water scarcity in turn will have a dramatic impact on agriculture. Another study in the PNAS collection combining climate, agricultural and hydrological models warns that freshwater shortages could double climate change's debilitation of global food crop yields.

Current agricultural models estimate that climate change will directly reduce food production from maize, soybeans, wheat and rice by as much as 43 percent by the end of the 21st century, encompassing a loss of between 400 and 2600 petacalories of food supply. But incorporating hydrological models reveals that when accounting for the decline of freshwater availability, there would be an additional loss of 600 to 2900 petacalories - potentially wiping out quantities equivalent to the total present-day food supply.

Such devastating potential losses could, however, be ameliorated by more efficient use of available surplus freshwater. The paper recommends "increases in irrigation capacity and efficiency" to be complemented by "efforts to increase water use efficiency and soil conservation in rainfed systems as well, which have a demonstrated capacity to boost crop yields without further exploiting freshwater resources in rivers and aquifers."

Other findings of the range of studies show that increases in river flooding are expected in more than half of the areas investigated, and that the frequency of drought may increase by more than 20% in some regions.

"There is an elephant in the room: current and future climate change impacts. But strangely, many people seem to be blind to it. Many decision makers prefer to turn a blind eye to global warming consequences, while many scientists tend to focus on very specific aspects of climate change. So we resemble the fabled blind men, who unknowingly touch different parts of the same elephant: grasping the animal's trunk, one of the men is convinced he has a snake in his hand, whilst one other mistakes the tail for a rope. To recognize the animal, they must talk to each other to properly identify the individual parts and to bring them together. This is exactly what this international project does." Guardian