Why You Should Buy Your Little Boy A Princess Costume 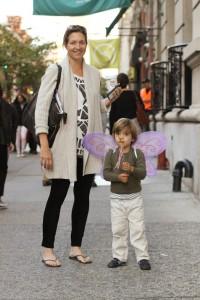 When I was pregnant, almost every nurse, doctor or lab technician asked me the same question: so you guys aren’t finding out the gender, huh?  To which, I replied the same way to each medical professional: well, there’s no way to know, is there?

Without fail, the person always looked at me like I’d landed from Mars. But I stuck to my guns: until there’s an ultrasound that can detect a teeny-tiny Barbie house or Thomas The Tank Engine inside a woman’s womb, no parent or doctor on earth can determine the gender of any baby (at least, not until he or she is much older, and then, it might still be a pretty difficult assessment).

Many folks make this mistake. They confuse sex (anatomy, which we can detect in the womb) and gender (a social construction, think “masculinity” and “femininity,” which we can not)— especially when it comes to young children.
It Doesn't Matter Who Wears the Pants: A Response to Hanna Rosin and The New York Times The Good Men Project The Good Men Project Contributor
The End of Men and the Rise of Women--and Heated Debate Kare Anderson Kare Anderson Contributor
Why We Need To Stop Bemoaning The 'End of Men' Meghan Casserly Meghan Casserly Forbes Staff

And many parents will go way out of their way to police the gender boundaries for their own kids and even kids they’ve never met before.

Just ask Mallory May. Yesterday, the Manhattan mother and her three-year-old son, Oscar were photographed by Brandon Stanton, a local blogger who runs Humans of New York, a site that describes itself as a photographic census of the city— and boy did the picture set off a firestorm of Facebook controversy.  There was little Oscar, prancing around his neighborhood, proudly dressed in one of his brand new Halloween costumes: a princess.

Within hours, the picture generated hundreds of comments (twenty four hours later, it tops a thousand), some of which accused May of being a bad mother for letting her son buy a “girl’s” costume. Others argued that she was trying to make a political statement at the expense of her child’s welfare.

“I’m sorry,” one commenter wrote. “But I would not let my little boy wear this. This is where mothers have to step in, and do their job right. It’s not to confuse children about their sexual orientation and other LGBT topics that [they deem] are appropriate.”

Another posted: “There is a very distinct difference between boys and girl. Raise boys to be men!”

The irony is that May actually purchased two costumes yesterday. Like every three-year old, Oscar couldn’t make up his mind and asked for the controversial princess get-up and a more gender-traditional super hero one. This morning, he told his mother, “Since I wore the other costume yesterday, I want to wear this today.”  Which is exactly what he did, on their way to the bagel shop.

“To me, limiting costume options based on gender just seems silly, and actually a little cruel at his age,” May says. “I really do think it would be more confusing to limit choices for a toddler. I was just having fun play with my little boy, indulging him in the magic years, which is what childhood should be about.”

And those magic years do go by in the blink of an eye. Before parents know it, for better or worse, their children’s peers will be policing the gender boundaries for them.  Dr. Alexandra Spessot, a psychiatrist in Durham, North Carolina, and a mother of two young children, explains that having this early time of gender fluidity is important for youngsters.

“I don’t think it’s wise to push gender identity on little kids. They’ll come to it on their own,” she emailed Forbes. “For the longest time, my son wanted a girl’s bike for Christmas—the one with the purple and pink tassels on it. We actually purchased the bike, when at the last minute, he changed his mind and asked for a boy’s bike. We still don’t know what changed his mind, but we had no problem buying the pink one.”

It turns out, teaching your kid how to cross traditional gender lines could be better for him in the long run. Showing boys that there isn’t one way to “be a man” may, in fact, be an invaluable lesson as he enters a world of new economic realities— where the same kinds of “male jobs” don’t exist anymore and if they do, aren’t necessarily a clear-cut path to long-term stability or upward mobility.

As Hanna Rosin describes in her new book, The End of Men And The Rise Of Women, men who’ve remained rigid and “cardboard” in their traditional, breadwinning roles, haven’t fared as well as women who more easily adapt, grow and now, in many cases, surpass their spouses in the new social and economic order.

So buying your little boy that princess costume? Might just be one of the smartest things you do for him this Halloween.  Forbes